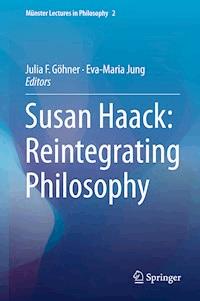 This volume documents the 17th Münster Lectures in Philosophy with Susan Haack, the prominent contemporary philosopher. It contains an original, programmatic article by Haack on her overall philosophical approach, entitled ‘The Fragmentation of Philosophy, the Road to Reintegration’. In addition, the volume includes seven papers on various aspects of Haack’s philosophical work as well as her replies to the papers. Susan Haack has deeply influenced many of the debates in contemporary philosophy. In her vivid and accessible way, she has made ground-breaking contributions covering a wide range of topics, from logic, metaphysics and epistemology, to pragmatism and the philosophy of science and law. In her work, Haack has always been very sensitive in detecting subtle differences. The distinctions she has introduced reveal what lies at the core of philosophical controversies, and show the problems that exist with established views. In order to resolve these problems, Haack has developed some ‘middle-course approaches’. One example of this is her famous ‘Foundherentism’, a theory of justification that includes elements from both the rival theories of Foundationalism and Coherentism. Haack herself has offered the best description of her work calling herself a ‘passionate moderate’.