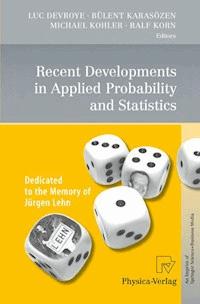 This book is devoted to Professor Jürgen Lehn, who passed away on September 29, 2008, at the age of 67. It contains invited papers that were presented at the Wo- shop on Recent Developments in Applied Probability and Statistics Dedicated to the Memory of Professor Jürgen Lehn, Middle East Technical University (METU), Ankara, April 23–24, 2009, which was jointly organized by the Technische Univ- sität Darmstadt (TUD) and METU. The papers present surveys on recent devel- ments in the area of applied probability and statistics. In addition, papers from the Panel Discussion: Impact of Mathematics in Science, Technology and Economics are included. Jürgen Lehn was born on the 28th of April, 1941 in Karlsruhe. From 1961 to 1968 he studied mathematics in Freiburg and Karlsruhe, and obtained a Diploma in Mathematics from the University of Karlsruhe in 1968. He obtained his Ph.D. at the University of Regensburg in 1972, and his Habilitation at the University of Karlsruhe in 1978. Later in 1978, he became a C3 level professor of Mathematical Statistics at the University of Marburg. In 1980 he was promoted to a C4 level professorship in mathematics at the TUD where he was a researcher until his death.