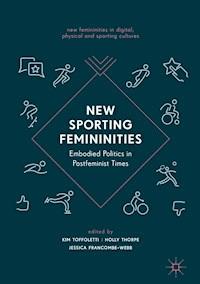 This edited collection critically explores new and emerging models of female athleticism in an era characterised as postfeminist. It approaches postfeminism through a critical lens to investigate new forms of politics being practised by women in physical activity, sport and online spaces at the intersections of gender, ethnicity, sexuality and ability.

New Sporting Femininities features chapters on celebrity athletes such as Serena Williams and Ronda Rousey, alongside studies of the online fitspo movement and women’s growing participation in activities like roller derby, skateboarding and football. In doing so, it highlights key issues and concerns facing diverse groups of women in a rapidly changing gender-sport landscape. This collection sheds new light on the complex and often contradictory ways that women’s athletic participation is promoted, experienced and embodied in the context of postfeminism, commodity feminism and emerging forms of popular feminism.