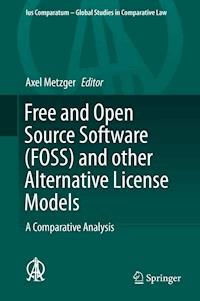 This book discusses the main legal questions raised by free and open source software (FOSS) licenses and other alternative license models, such as Creative Commons. The legal questions raised by FOSS and other alternative licenses have been the subject of an intense international debate among legal scholars and practising lawyers in the last years. Courts in different jurisdictions have confirmed that the core features of FOSS licenses are compliant with the respective applicable laws and thus enforceable in the respective jurisdictions. What is still missing so far is an in-depth comparative analysis of the legal issues raised by FOSS, Creative Commons and other alternative license on a worldwide scale. This book presents a general report on FOSS licenses and alternative license models to establish common ground and enable comparison between jurisdictions. The general report is followed by 24 national reports covering the world's most important IT-markets. General and national reports use the same structure to facilitate the comparison. The book shows that despite the differences in their origins, all FOSS projects use detailed licenses for the organisation of their communities. It also shows the differences in the proofing of these licenses by courts in some jurisdictions and the tailor-made provisions established by some legislators to solve the legal issues raised by the license model.