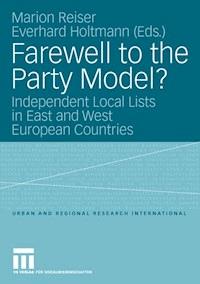 Farewell to the Party Model? ebook

Marion Reiser, Everhard Holtmann Local independent lists as political actors are a common phenomenon on the local level in many European countries – in established Western democracies as well as in the ‘new’ democracies in Central and Eastern Europe. In some West European countries, these non-partisan groups have been an established and stable element in the local political system for decades. Ty- cally, they understand themselves as protectors of a harmonious factual political style. In their opinion, good local politics is not compatible with party politics so they consequently perceive themselves as non-parties. During the last two d- ades, presence and success of local lists have steadily increased in these co- tries. Furthermore, during the last years local lists emerged also in countries which had been formerly fully party-politicised on the local level. Explanations offered for these developments are often based on the observation of a general decline of trust in established parties and politicians. Hence, it has been argued that the disenchantment with political parties is a fertile ground for local lists. For the Central and East European countries, this argument can be - ployed only to a certain extent. Local lists established themselves in the early 1990’s as important actors on the local level especially due to a lack of party organisation in the process of democratic consolidation.