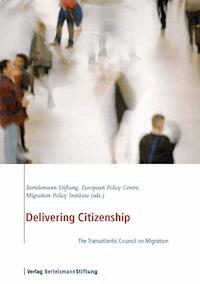 The 21st century promises to be an "Age of Mobility." More people around the globe, from an ever greater variety of backgrounds, are migrating. As Europe and North America absorb larger and more diverse inflows, many policymakers, commentators, and academics are questioning whether their societies can cope with the influx. Citizenship has emerged as one of the key policy battlegrounds for such concerns. Citizenship lies at the nexus of a host of social policy issues because it provides definitions of identity, belonging, and participation in key aspects of society, including the right to vote. Governments recognize the urgent need to understand citizenship better. Once a narrow, somewhat static legal backwater, citizenship has become a dynamic policy vehicle for promoting the political incorporation of immigrants and, by extension, their more complete integration. This book is the first major product of the Transatlantic Council on Migration. It offers insights into key aspects of the citizenship debate from a policy perspective. It is a result of the deliberations and thinking of the Transatlantic Council on Migration, which brings together leading political figures, policymakers and innovative thinkers from the USA and Europe. The Council is a new initiative of the Migration Policy Institute (MPI) in Washington, DC. The Bertelsmann Stiftung and the European Policy Centre (in cooperation with the King Baudouin Foundation) are the Council's policy partners.