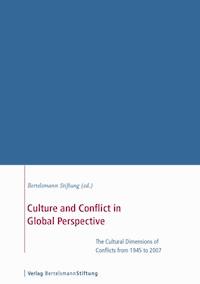 Has Samuel Huntington's proposed "clash of civilizations" actually happened in the post-1945 era? Events such as 9/11 2001 or the crisis due to caricatures of Mohammed might suggest it has. The topic of culture and conflict has been the subject of fierce debate among scholars and the public alike over the last two decades. The Bertelsmann Stiftung, which has been committed to promoting international cultural dialogue for many years now, is publishing "Culture and Conflict in Global Perspective", a theoretically-informed definition of cultural conflicts and a world-wide mapping of such conflicts between 1945 and 2007. The publication is based on an empirical study that explores in what conflicts cultural factors played a role and to what extent they influenced the intensity of violence in the respective conflicts. The study and the explanations derived from it form an important instrument to foster cultural dialogue for peaceful coexistence in a globalized world.

Foreword
This study on the role of culture in conflicts of global importance is the result of extensive collaboration between the Institute of Political Science at the University of Heidelberg and the Bertelsmann Stiftung. A number of events informed our mutual desire to objectify, through the use of comprehensive data, the often highly emotional debate on how the world’s diverse cultures can-and cannot-coexist.
Reports of conflicts with a cultural background have proliferated recently, not just in the media, but also in the Conflict Barometer, published at the University of Heidelberg to assess global strife. Of this, the global uproar in 2006 over the Danish cartoons of the Prophet Mohammed is just one high-profile example. Along with this trend, the desire grew to carry out a systematic assessment of the world’s conflicts. In addition, during the activities organized as part of the Bertelsmann Stiftung’s International Cultural Dialogue series, it became increasingly clear that there was a growing need around the globe for concrete strategies to address cultural conflicts. Yet, in order to know where strategies for promoting intercultural dialogue might prove most effective, it is also imperative to know how cultural differences give rise to and fuel conflicts.
In addition, both the Bertelsmann Stiftung and the Institute of Political Science wanted to contribute to the European Year of Intercultural Dialogue in 2008 by engaging in a differentiated examination of the ‟clash of civilizations,” as formulated by the political scientist Samuel Huntington.
Those were the circumstances that ultimately gave rise to the following questions, which this study aims to address: What are the core characteristics of cultural conflict? How can such conflicts be categorized? Is culturally fed strife becoming more dominant within the world’s various conflicts? To what extent do cultural factors influence the genesis and progression of conflicts? Given empirical findings, how should actors dedicated to cultural dialogue react? The team of researchers led by Prof. Aurel Croissant and Prof. Uwe Wagschal has prepared this study with the utmost care. With regard to methodology, they have taken a major, pioneering step with their definition and operationalization of cultural conflict. In particular, their focus on religion, language and historicity as identity-giving cultural factors has proven especially insightful.
Above all, our findings give rise to a key realization: Although cultural conflicts have increased significantly, neither a purported ‟clash of civilizations” nor religious differences can be seen as the key drivers of international tensions. For the most part, political conflicts result from a confluence of factors. Yet, as soon as cultural issues enter into political strife, the chances increase that violence will ensue. For that reason, this study’s essential message is that cultural conflicts must be analyzed in a differentiated manner in order to recognize and reduce the threat early on of cultural aspects being instrumentalized to aggravate political differences. The most important strategies to this end are the promotion of intercultural dialogue and the improvement of basic sociopolitical conditions. Cultural conditioning might be a given-to make use of a thesis advanced by Lee Kuan Yew, former prime minister of Singapore-but cultural conflicts are not.
The Bertelsmann Stiftung would like to thank all of those who helped produce this study, first and foremost the authors and the academic specialists at the University of Heidelberg, for their fruitful collaboration, as well as the employees of the Bertelsmann Stiftung. In addition, we would like to thank all of the experts who participated in this study’s development phase or who were involved in presenting the initial findings in Heidelberg and at the International Cultural Forum in Vietnam. They include Prof. Helmut Anheier, Dr. Matthias Basedau, Prof. Thorsten Bonacker, Prof. Sven Chojnacki, Prof. Ulrich Eith, Dr. Gero Erdmann, Prof. Johan Galtung, Prof. Hans Gebhard, Prof. Andreas Hasenclever, Josef Janning, Prof. Hans Keman, Dr. Patrick Köllner, Prof. Gudrun Krämer, Prof. Jan-Erik Lane, Prof. Surendra Munshi, Prof. Dieter Senghaas and Dr. Peter Thiery.
Malte C. Boecker, LL.M. Senior Expert, Bertelsmann Stiftung
Inhaltsverzeichnis
Titel
Impressum
Vorwort
Preface
Einleitung
Cultural Conflicts
Cultural conflicts as conflicts referencing culture
Cultural dimensions and conflict fields
Cultural context as reference point for conflict communication: types of ...
Cultural context as a reference point for conflict motivation: culture as a ...
Cultural Conflicts as a Subset of Global Conflicts Since 1945
The database
First finding: cultural conflicts make up a high and increasing share of all conflicts
Second finding: cultural conflicts are primarily domestic
Third finding: the most common cultural conflicts are religious and historicitary
Fourth finding: cultural conflicts are particularly violent
Fifth finding: there are major differences between regions
Topography of cultural conflicts within the observation period
Case Studies
The Aceh conflict as an example of historicitary cultural conflict
Belgium’s linguistic conflict
Ethno-regional and religious conflict in Nigeria
The 2005 conflict over Danish cartoons depicting Mohammed
Causes of Conflict and the Significance of Cultural Context
Cultural fragmentation as conflict context
Multivariable analysis: the relative explanatory power of cultural factors
The impact of cultural variables on conflict (1950-2005)
Countervailing influences
The youth bulge as a challenge to the ‟clash of civilizations” theory
Interdependency and non-linearity of explanatory factors
Conclusion
References