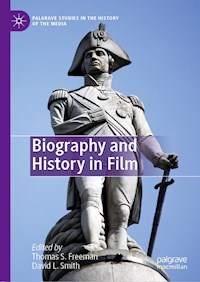 Biography and History in Film ebook

The essays in this volume seek to analyze biographical films as representations of historical individuals and the times in which they lived. To do this, contributors examine the context in which certain biographical films were made, including the state of knowledge about their subjects at that moment, and what these films reveal about the values and purposes of those who created them. This is an original approach to biographical (as opposed to historical) films and one that has so far played little part in the growing literature on historical films. The films discussed here date from the 1920s to the 2010s, and deal with males and females in periods ranging from the Middle Ages to the end of the twentieth century. In the process, the book discusses how biographical films reflect changing attitudes towards issues such as race, gender and sexuality, and examines the influence of these films on popular perceptions of the past. The introduction analyses the nature of biographical films as a genre: it compares and contrasts the nature of biography on film with written biographies, and considers their relationship with the discipline of history. As the first collection of essays on this popular but understudied genre, this book will be of interest to historians as well as those in film and cultural studies.