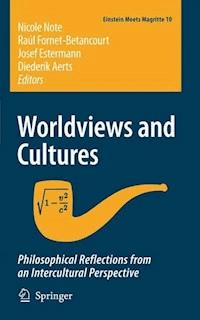 Globalization brings people and cultures together, producing, in addition to deep and rich encounters, exclusion, racism, xenophobia and asymmetries. The present book takes these issues implicitly as its starting point by thoroughly reflecting on them from a perspective of worldviews, as one of many approaches.

More specifically, it focuses on people’s implicit and explicit interpretations and assumptions of the world, of themselves and of others. Often deeply rooted and hard to change, they have an important function, for without them we would continually need to question what we do and what we think. In their absolutist form, these assumptions may become a barrier for open-mindedness, and hence for deep intercultural understanding and exchange. We need to find a balance between both stances.

Intercultural philosophy tries to fulfil this role, on the one hand by comparing different cultures on a deep philosophical level, and as a way to better understand each other’s core assumptions, and on the other hand by arguing for an intercultural philosophy grounded in specific cases. The contributions of this book conceive of "another possible world" which does not condemn cultural and religious diversity as a detonator for "Clashes of Civilizations", but rather welcomes it as a source of inspiration for all and of respect for the "different".