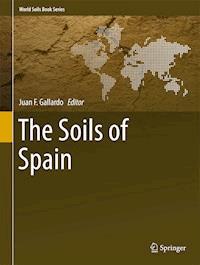 The Soils of Spain ebook

This book provides the reader with a comprehensive overview of The Soils of Spain gathered by a variety of Spanish experts in the field. It presents soils in this country as particularly conditioned by the naturally diverse and drastic distribution of the Spanish landscape, characterized by mountainous ranges in the North, and arid areas in the South and the East. The first chapter sets the agricultural scenario in Spain as influenced by the Arabic culture and American agricultural products; the second chapter provides a classification and distribution of Spanish soils; the third chapter approaches the topic of soils in the characteristically humid Northern Iberia area as prone to diversity and soil evolution; the fourth focuses on the soils of the South and East of Spain as affected by lack of rainfall and abundance in calcic soil horizons; the fifth chapter deals with Mediterranean soils, having as a particular characteristic the dominance of red colors; and the last chapter discusses the challenges and future issues of Spanish soils.