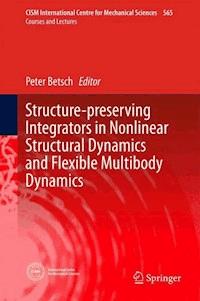 This book focuses on structure-preserving numerical methods for flexible multibody dynamics, including nonlinear elastodynamics and geometrically exact models for beams and shells. It also deals with the newly emerging class of variational integrators as well as Lie-group integrators. It discusses two alternative approaches to the discretization in space of nonlinear beams and shells. Firstly, geometrically exact formulations, which are typically used in the finite element community and, secondly, the absolute nodal coordinate formulation, which is popular in the multibody dynamics community. Concerning the discretization in time, the energy-momentum method and its energy-decaying variants are discussed. It also addresses a number of issues that have arisen in the wake of the structure-preserving discretization in space. Among them are the parameterization of finite rotations, the incorporation of algebraic constraints and the computer implementation of the various numerical methods. The practical application of structure-preserving methods is illustrated by a number of examples dealing with, among others, nonlinear beams and shells, large deformation problems, long-term simulations and coupled thermo-mechanical multibody systems. In addition it links novel time integration methods to frequently used methods in industrial multibody system simulation.