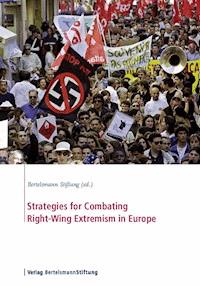 Right-wing extremism is a phenomenon that can be found throughout Europe. All democratic societies are threatened by racist, anti-pluralistic and authoritarian ideas. Even though the so called "radical right" differs in character and ideology in the various European countries it strives to restrict civic and human rights as well as to change the constitutional structures that are based on the principles of democracy and liberty. Individual European countries deal with this challenge differently. The various policy approaches found in these countries are a good source for developing improved practices for fighting rightwing extremism in Germany and worldwide. With this publication the Bertelsmann Stiftung presents an overview of the radical right in Austria, Belgium, Denmark, France, Germany, Great Britain, Hungary, Italy, the Netherlands, Sweden and Switzerland. It also includes the most successful strategies against right-wing extremism found in these countries. The main focus of this publication is the actions pursued by the governments, political parties and actors of the civil society. Judicial provisions are highlighted as well as the implementation of laws, special action programs, the effectiveness of prosecution of right-wing crimes, cooperation of parties, institutional responsibilities, cooperation of authorities with NGOs and civil commitment against right-wing extremism.

Introduction: Terms and concepts in the research on the radical right

Patterns of variation and contextual factors

How do these cultural and structural patterns inform the patterns of radical-right party and movement strength? Table 5 summarizes the findings discussed earlier and indicates that some countries have strong radical right-wing parties and a weak movement sector, while others have weak radical right-wing parties and a strong movement sector (cf. also Minkenberg 2003a; Koopmans et al. 2005). Certain contextual factors, such as conventional religious traditions and the presence of Islam, seem to have a bearing on this pattern. Four of the six cases in which radical right-wing parties scored high in the 1990s are Catholic countries; or, seen from another angle, in no Catholic country do radical-right parties score below-average results. Other than Norway, by the end of the 1990s, Denmark was the only Protestant country to have joined the group, and Switzerland joined as a religiously mixed country. Moreover, in all countries where Islam is the second-largest religion, the radical-right parties garner strong support.
Table 5: Party strength and movement strength of the radical right and context factors in selected European democracies (ca. 2000)
One might argue that the combination of a homogenous Catholic or Protestant tradition and the prominence of Islam increases the resonance and mobilization of the radical-right parties. The Catholic tradition has been characterized by religious homogeneity or even monopoly, while Catholic dogma has a holistic outlook, as opposed to the more individualistic Protestant traditions (cf. Bruce 2003). A particularly strong Islamic presence may challenge this homogeneity more than it would Protestant or more pluralistic traditions. In fact, in the early 1980s, no strong radical-right parties emerged in countries with a relatively high level of pluralism except in Switzerland.
At the same time, however, this clearly does not apply to movement mobilization. Indeed, Catholic countries exhibit comparatively weak radical-right movements or- as far as available comparable data shows-racist violence. These seem highest in Protestant countries. In the domain of cultural factors, the role of national identity, the proportion of the foreign-born population and resistance to multiculturalism appear less significant than religion. For example, party strength is high regardless of whether the proportion of foreigners is moderate or high (cf. also Mudde 2007: 212- 224).
Structural variables seem to have, at best, weak effects in this classification. Our overview confirms the finding of others that the type of electoral system seems only marginally relevant (cf. Kitschelt 1995; Carter 2005: 157). The convergence of established parties can claim more explanatory power (Carter 2005: 211), but it may be more relevant for the breakthrough of radical right-wing parties than for their consolidation (cf. Kitschelt 2007; Schain et al. 2002). The role of other state and political actors appears to be more significant. Where these actors have shifted from excluding the radical right to partially collaborating with them, radical right-wing parties seem to have benefited (cf. Minkenberg 2009). Where established parties have brought the radical right into government, however, as was the case in Austria and (briefly) in the Netherlands, the radical right has suffered. On the other hand, when established parties and the state have taken a rigid stand against the radical right, radical right-wing parties have not flourished. Instead, the movement sector has developed-even in the face of the state’s repertoire of repression.
All this reinforces the insight that the organizational strength of the radical-right parties (along with their degree of fragmentation and level of violence) and the success of their electoral mobilizations seem conditioned less by popular demand and more by the responses of their political environment, particularly the established parties and the state. This type of analysis, however, is still in its infancy. More data-and especially comparable data-are needed, especially when examining (successful) ways of dealing with the varieties of the radical right in Europe.

The radical right in Austria has some specific qualities: As a result of the role Austria has played in the rise and the rule of the NSDAP in Europe, the Austrian far right has always to be observed regarding its connection with the Nazi past. As the Austria government and the Austrian legal system-partly responding to international expectation and pressure-singles out Nazism as a kind of “defining other” of Austria’s democracy, the legal and official attitude in Austria is strongly and consistently against the Nazi variety of the far right.
This does not mean that neo-Nazi groups and activities don’t exist in Austria. But it does imply that this hard-core phenomenon of the radical right is comparatively isolated and weak: The résumé of Austria’s fight against the radical right as far as it can be identified as rooted more or less openly in Nazism can be called rather good.
But the field in which Austria’s radical right should be observed, analyzed and fought is not so much the hard-core neo-Nazi elements. It is a rather broad gray zone between legitimate democratic attitudes and activities and antidemocratic elements who-especially not in their own perception-may not be called extremist; they have negative stereotypes of Jews and Africans, display emotional aggressiveness against migrants, and show a tendency to play down some of the specific qualities of Nazism-beyond the usually broadly condemned crimes against humanity.