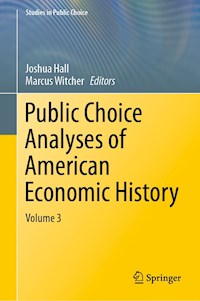 This book is the third installment in a series of volumes looking at episodes in American economic history from a public choice perspective. Each chapter discusses citizens, special interests, and government officials responding to economic incentives in both markets and politics. In doing so, the book provides fresh insights into important periods of American history, from the Rhode Island’s 1788 Referendum on the U.S. Constitution and the political influence of women’s clubs in the United States. The volume features economic historians such as Ruth Wallis Herndon, junior public choice scholars such as Jayme Lemke and Leo Krasnozhon, and political scientists such as Michael Faber. This volume will be useful for researchers and students interested in economics, history, political science, economic history, public choice, and political economy.