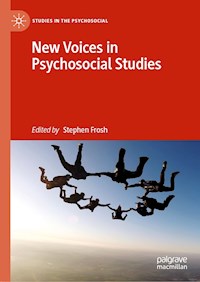 336,80 zł
Psychosocial studies in the UK is a diverse area of work characterised by innovation in theory and empirical research. Its extraordinary liveliness is demonstrated in this book, which showcases research undertaken at the Department of Psychosocial Studies at Birkbeck, University of London, UK, highlighting three domains central to the discipline – psychoanalysis, ethics and reflexivity, and resistance. The book engages psychosocially with a wide variety of topics, from social critiques of psychoanalysis through postcolonial and queer theory to studies of mental health and resistance to discrimination. These ‘New Voices in Psychosocial Studies’ offer a coherent yet wide-ranging account of research that has taken place in one ‘dialect’ of the new terrain of psychosocial studies and an agenda-setting manifesto for some of the kinds of work that might ensure the continued creativity of psychosocial studies into the next generation.

This book demonstrates the ongoing development of psychosocial studies as an innovative, critical force and will inspire both new and established researchers from across the fields that influence its transdisciplinary approach, including: critical psychology and radical sociology, feminist, queer and postcolonial theory, critical anthropology and ethnography and phenomenology.