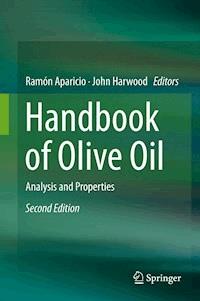 The Handbook of Olive Oil presents an up-to-date view of all aspects of olive oil. It is written from an inter-disciplinary point of view and will be of use in research and development as well as in routine laboratory and process operations. This second edition includes new chapters devoted to genetic studies and agronomic aspects of new orchards and cultivars, which, in combination with the most recent biochemical studies and technological developments, explain the unique chemical composition of olive oil. The analytical aspects of the first edition are now described in six new chapters focused on the chemical compounds responsible for olive oil traceability and sensory perceptions (odor, color, and taste) utilizing chromatographic, spectroscopic, and in-tandem techniques.

Nutritional and sensory aspects are the basis for the current success of virgin olive oil among consumers, and this new edition re-analyzes in two new chapters the role of lipids, in general, and olive oil, in particular, in nutrition and health. In addition, the methodologies developed for determining sensory quality, olive oil oxidation, and deep-frying are extensively described and discussed. The role of consumers in olive oil studies of marketing and acceptability is covered in a new chapter.

This second edition has not ignored the fact that the popularity of olive oil has made it a preferred target for fraudsters. Deliberate mislabeling or mixtures containing less expensive edible oils are topics described in depth in two chapters devoted to traceability and adulteration. There is also a new chapter focused on the olive refining process, which is a relevant activity in the olive oil world, and another chapter displaying tables of chemical and sensory information from olive oils produced all over the world.

The book is written at two levels: the main level is structured as a tutorial on the practical aspects of olive oil. A second, more methodological level, is intended for specialists in the different sciences that contribute to olive oil studies (biochemistry, chemistry, physics, statistics etc).

This edition also details changes that are needed in different disciplines in order to overcome current problems and challenges.