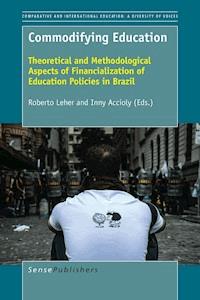 172,99 zł
"The texts in this book do not compose a mere selection: the questions that guide the chapters form a cohesively and coherently structured totality which expresses the movement of construction of what the authors understand to be a new problematic in the education field in Brazil and in the world.

The book addresses basic, professional and undergraduate education from perspectives that highlight different aspects of privatization, commercialization and commodification, as well as the presence of the business community in the definition of educational policies. These levels and modalities of teaching are analysed in articulation both with science, technology and so-called technological innovation policies and with the modus operandi of the state.

“This is a book that should be read by teachers, administrators and all global citizens who have a stake in the future of the planet. Unlike many books by authors from the United States who attack poverty and economic inequality without critiquing capitalism, this book has the courage to challenge capitalism at its very roots. Capitalism connects us all and it will require all of us to dismantle capitalism and replace it with a socialist alternative. Commodifying Education reveals how education in Brazil is inextricably entangled in the logic and practice of economic fascism, which goes under many names, such as austerity capitalism and neoliberal capitalism. I urge educators everywhere to engage the lucid arguments presented in this important work.” – Peter McLaren, Distinguished Professor in Critical Studies, Chapman University, and author of Pedagogy of Insurrection"