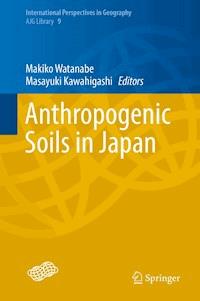 This book enhances the discussion of anthropized soils with photographs of soil profiles and provides general information about soils in Japan, using data on their physical and chemical properties. Soils targeted in this book have wide spectra in anthropized influences from lesser effects such as agricultural improvements to drastic changes caused by infrastructure construction. These include soils sealed by technic hard materials, on ski slopes, on river embankments and coastal berms, in historical urban parks, on man-made islands in Tokyo Bay, in reclaimed lands, in greenhouse fields, and those filling in swamplands. These examples supported with data can be a bridge between agriculture and civil engineering to understand how anthropogenic activities influence soils. Because anthropogenic impacts have increased during the past decades along with concentrations of populations into cities, processes in soils must be addressed from the point of view of diverse land-use purposes.


The book includes information with new data produced by active researchers from many institutes and universities as it refers to soils altered by human activities and thus is informative to specialists in various disciplines related to soils. It is also valuable to students for viewing soils in cities, infrastructure construction areas, and other affected locations. Evaluation and understanding of soils now has become essential for researchers in a range of fields and for policy makers in agriculture as well as urban planning, civil engineering, and disaster sciences. This work serves as an impetus for launching further study of soils and environments.