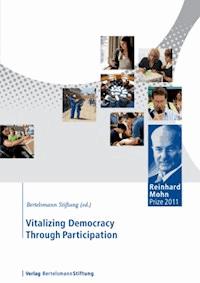 Fewer and fewer people in Germany are casting their votes or taking part in politics. At the same time, Germans want to have their say and are lending their voices to a growing number of debates such as education reform or anti-smoking regulations. Throughout the world, there are several government institutions involving their citizens in processes of political decision-making. This publication introduces seven promising examples of democracy in action-the finalists for the 2011 Reinhard Mohn Prize and their approaches to "Vitalizing Democracy Through Participation." Whether involving the use of modern technologies such as SMS to facilitate participatory budgeting in La Plata (Argentina) or establishing a citizens' assembly for electoral reform in British Columbia (Canada), these projects attest to the power of civic engagement in solving problems-democratically. The projects presented here are therefore a source of inspiration for civic participation in Germany. The Bertelsmann Stiftung awards the Reinhard Mohn Prize to commemorate Reinhard Mohn the citizen, entrepreneur and founder by nurturing his ideas, beliefs and vision. In the spirit of these goals, the Bertelsmann Stiftung seeks out effective strategies worldwide from which we all can learn.

In June 2010, the Bertelsmann Stiftung began its search for a winner of the Reinhard Mohn Prize 2011, which includes a prize sum of € 150,000. This search took place worldwide, with the participation of the public. Up until August 22, 2010, interested parties could use an Internet-based platform (www.vitalizing-democracy.org) to submit, discuss and evaluate proposals for potentially prizeworthy projects. More than 123 projects from 36 countries were submitted, reviewed and vigorously discussed. Since they were often very detailed and accompanied by background materials, these high-quality project proposals provided a solid foundation of information leading into the next phase. Overall, this was an incredible response, allowing us insight into a huge diversity of exciting and informative projects.

In August 2010, the Bertelsmann Stiftung collaborated with a group of international experts in selecting 20 of the project proposals to be placed on a short list. As a basis for selection, the group used the citizen evaluations submitted via the website and the following seven criteria:
• Problem-solving capacity and impact: How did the project contribute to solving a specific problem? To what extent did the project have an impact on decision-making processes?
• Scope and representativeness: Did the project involve a diverse selection of people that was representative of all intended target groups?
• Democratic capacity: Has the project encouraged democratic conduct among citizens, politicians and other stakeholders?
• Inclusion of disadvantaged groups: To what extent was the project able to involve disadvantaged groups in the process?
• Efficiency and sustainability: Was the project implemented efficiently and sustainably? Could it be repeated?
• Degree of innovation: How innovative was the project?
• Transferability: Is the project’s approach transferable to Germany?

In October 2010, a working group made up of members drawn from the German political, academic and civil-society communities nominated seven finalists. These finalists came from five different countries and had successfully engaged citizens in a variety of subject areas and ways. The finalists were:
• British Columbia, Canada—Citizen’s Assembly on Electoral Reform: The provincial government in British Columbia successfully involved citizens in the processes of formulating and approving a new electoral law.
• Belo Horizonte, Brazil—Participatory budgeting and cooperative governance: Every two years, Belo Horizonte carries out a comprehensive participatory budgeting process. In addition, the city regularly organizes conferences, forums and citizens’ councils on issues such as health, education and the arts.
• Geraldton, Australia—A vision for a sustainable city: The city council in Geraldton used an innovative, deliberative process to develop a sustainability strategy and strategic plan for the region.
• Hampton, United States—Deliberative governance and citizen participation in all areas: The city council in Hampton created a comprehensive participation process that is particularly aimed at engaging young people in political decision-making.
• La Plata, Argentina—Participatory budgeting through SMS: As part of La Plata’s participatory budgeting process, citizens can submit urban-development proposals and vote on them at polling stations or via SMS (text-messaging).
• Portsmouth, United States—Portsmouth Listens: In Portsmouth, citizens convene in so-called “study circles” to develop solutions to controversial and complex issues, which are then published in the local newspaper and communicated to the city council for consideration.
• Recife, Brazil—Town and school development through participatory budgeting: In Recife, citizens introduce urban development proposals, monitor their implementation and define priorities in various policy areas.

In the fall of 2010, a team from the Bertelsmann Stiftung visited each of the seven finalists on location. As part of this in-depth research, the team interviewed representatives of all groups involved in the particular project as well as numerous citizens—including both advocates and critics—in order to develop the most comprehensive picture possible of each project. Working with scholars and a film crew, case studies and documentary film portraits were created for each of the finalists. This information was then provided to a representative selection of 12,000 representatively chosen citizens in Germany. In this way, the citizens were able to develop a balanced view of each of the seven finalists. The citizens were also asked a number of questions, and address various questions such as which projects offered approaches that could help vitalize democracy in Germany and which project they might themselves participate in if implemented in Germany. It was the votes of these citizens—and these citizens alone—that determined the winner of the Reinhard Mohn Prize 2011, who was then honored at a formal ceremony in the Theater Gütersloh.
Adapting to Change Instead of Heading for Crisis—Challenges and Opportunities for Democracy in Germany
Jörg Dräger, Roland Roth
“Democracies are not permanent orders but, rather, are better thought of as experiments that institutionalize a process of ongoing change.”
James Bohman, 2007
First, the good news: Since antiquity, democracy has been considered a stable yet especially adaptable form of political rule. Political equality—the equal chance for all to participate—is its normative center. Civil liberties (freedom of assembly, expression and association) and periodic free elections create a political public that elected governments must answer to. This keeps governments sensitive to new social challenges and the changing demands of its citizens. While democracies can claim to rely on the “wisdom of crowds,” authoritarian governments place trust in repressive instruments of power ultimately guaranteed by military force. For them, it represents the opportunity to ignore the need to promote institutional learning or participatory processes. The consequences of this aloofness became impressively clear in some North African and Middle Eastern countries in early 2011.