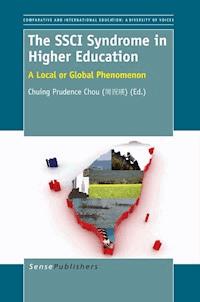 As a result of the world class university rankings, many governments adopt public incentives and sanctions to push universities to excel. Above all, the better faculty research publication in SSCI and SCI journals, the more resources and social prestige universities will obtain. This timely book attempts to relate these dilemmas in Taiwan to many non-English speaking counterparts which also struggle with the worldwide SSCI syndrome. As Taiwan’s higher education system, similar to that of some other countries, has been recently devastated by the SSCI-based quantitative evaluations of academic performance in terms of its adverse impacts on the balances between teaching vs. research; qualitative vs. quantitative evaluations; globally oriented, English vs. locally oriented, non-English publications; and publications in academic journals vs. books, The SSCI Syndrome in Higher Education is a long overdue study that offers a systematic, comprehensive coverage of the above-mentioned SSCI syndrome on the dynamics of Taiwan’s academe. This book definitely helps fill an important gap in the literature on Taiwan’s higher education system. Tsung Chi Professor of Politics, Occidental College, USA Prudence Chou’s book addresses an academy on crisis caused by the ceaseless hype over university rankings. It further confirms that who comes out on top depends on who is doing the ranking. To save the heart and soul out of the Taiwanese academy, this book makes a cogent argument for culturally-responsive research in the social sciences and humanities. Gerard A. Postiglione Professor and Head, Division of Policy, Administration and Social Sciences Director, Wah Ching Center of Research on Education in China, The University of Hong Kong A spectre is haunting almost all universities in the world, including Taiwan — the spectre of “indexization.” Academics, particularly social scientists are panting from the pressure of globally spread neoliberal ideology and market-based principles. Collegiality on campus in the good old days has declined, and managerialism gained power instead. Competitive funding and university rankings are excessively emphasized, and research results are required to be internationalized, i.e., published in English. Although this book is a case study of so-called SSCI syndrome in Taiwan, the problems and challenges as well as prescription contained here are common to all academics, especially those in the non-English speaking countries positioned as “peripheral.” Yutaka Otsuka Professor of Hiroshima University, President of Japan Comparative Education Society The danger with SSCI syndrome is that it encourages social studies in nonwestern societies to dissociate themselves from local contexts, reflecting a particular view of what is claimed to be ‘universal’ that is informed only by the Western (especially English-speaking) world. It raises the question of what counts as ‘scholarship’ and defines what knowledge is and who may claim competence in it. This volume serves us well as a timely reminder of such a great danger. Rui Yang Professor, Faculty of Education, University of Hong Kong