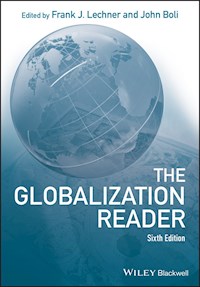 An introduction to the issues surrounding the complex and controversial realities of today's interconnected world, the revised sixth edition Since its initial publication, The Globalization Reader has been lauded for its comprehensive coverage of the issues surrounding globalization. Now in its sixth edition, the Reader has been thoroughly revised and updated and continues to review the most important global trends. Including readings by a variety of authors, the text offers a wide-ranging and authoritative introduction to the political, economic, cultural, and experiential aspects of globalization. The updated sixth edition presents the most accessible and comprehensive review of current debates and research. Contributions from scholars, activists, and organizations provide balanced viewpoints and expert coverage of the many aspects of globalization. The Globalization Reader offers readings on an exciting range of new topics as well as retaining key globalization topics such as the experience of globalization, economic and political globalization, the role of media and religion in cultural globalization, women's rights, environmentalism, global civil society, and the alternative globalization movement. This important resource: * Covers the many complex dimensions of globalization * Includes contributions from many of the most prominent globalization scholars * Presents concise and informative introductions to each major topic * Offers compelling discussion questions for each section * Contains readings on a variety of new topics such as migration, medical tourism, state policy regarding abortion and same-sex sexual relations, the UN Global Compact, climate justice, and more Written for students in undergraduate and graduate courses in sociology, political science, anthropology and geography, the revised sixth edition covers courses such as globalization, comparative political economy, international relations and similar topics.