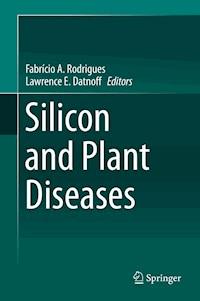 Silicon, considered to be the second most abundant mineral element in soil, plays an important role in the mineral nutrition of plants. A wide variety of monocot and dicot species have benefited from silicon nutrition, whether direct or indirect, when they are exposed to different types of abiotic and or biotic stresses. Besides the many agronomic and horticultural benefits gained by maintaining adequate levels of this element in the soil and also in the plant tissue, the most notable effect of silicon is the reduction in the intensities of a number of plant diseases caused by biotrophic, hemibiotrophic and necrotrophic plant pathogens in many crops of great economic importance. The aim of this book is to summarize our current understanding of the effects of silicon on plant diseases. The chapters address the dynamics of silicon in soils and plants; the history of silicon in the control of plant diseases; the use of silicon to control soil-borne, seed-borne and foliar diseases in monocots and dicots; the mechanisms involved in the host resistance against infection by plant pathogens mediated by silicon as well as the current knowledge at the omics level, and finally, highlights and prospects for using silicon in the future.