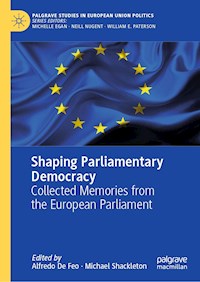 This book analyses nearly 100 original interviews with Members of the European Parliament from across the European Union who were active between 1979 and 2019. These interviews, preserved in the Historical Archives of the European Union at the European University Institute, capture the memories of the MEPs about their own roles and their assessment of what the parliament achieved in developing a European parliamentary democracy in the forty years following the first direct elections. The book offers a taste of the interviews in ten chapters, each of which corresponds to a specific theme presented in the archive: choosing the parliament, working inside the parliament machine, living inside the political groups, playing a part in major moments, influencing and shaping policy, scrutinizing and holding to account, making a mark beyond the EU, communicating the work of the parliament, keeping in touch with national societies, and looking to the future.