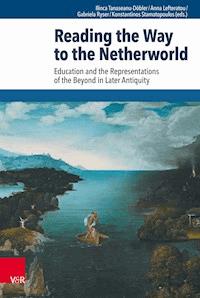 Reading the Way to the Netherworld ebook

The volume focuses on the various representations of the Beyond in later Antiquity, a period of intense interaction and competition between various religious traditions and ideals of education. The concepts and images clustering around the Beyond form a crucial focal point for understanding the dynamics of religion and education in later Antiquity. Although Christianity gradually supersedes the pagan traditions, the literary representations of the Beyond derived from classical literature and transmitted through the texts read at school show a remarkable persistence: they influence Christian late antique writers and are still alive in medieval literature of the East and West. A specifically Christian Beyond develops only gradually, and coexists subsequently with pagan ideas, which in turn vary according to the respective literary and philosophical contexts. Thus, the various conceptualisations of the great existential unknown, serves here as a point of reference for mirroring the changes and continuities in Imperial and Late Antique religion, education, and culture, and opening up further perspectives into the Medieval world.