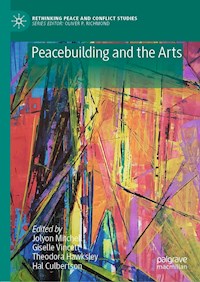 Peacebuilding and the Arts ebook

408,40 zł
"Ending violent conflict requires societies to take leaps of political imagination. Artistic communities are often uniquely placed to help promote new thinking by enabling people to see things differently. In place of conflict’s binary divisions, artists are often charged with exploring the ambiguities and possibilities of the excluded middle. Yet, their role in peacebuilding remains little explored. This excellent and agenda-setting volume provides a ground-breaking look at a range of artistic practices, and the ways in which they have attempted to support peacebuilding – a must-read for all practitioners and policy-makers, and indeed other peacemakers looking for inspiration."
Professor Christine Bell, FBA, Professor of Constitutional Law, Assistant Principal (Global Justice), and co-director of the Global Justice Academy, The University of Edinburgh, UK

" Peacebuilding and the Arts offers an impressive and impressively comprehensive engagement with the role that visual art, music, literature, film and theatre play in building peaceful and just societies. Without idealizing the role of the arts, the authors explore their potential and limits in a wide range of cases, from Korea, Cambodia, Colombia and Northern Ireland to Uganda, Rwanda, South Africa and Israel-Palestine."
Roland Bleiker, Professor of International Relations, University of Queensland, Australia, and author of Aesthetics and World Politics and Visual Global Politics


" Peacebuilding and the Arts is the first publication to focus critically and comprehensively on the relations between the creative arts and peacebuilding, expanding the conventional boundaries of peacebuilding and conflict transformation to include the artist, actor, poet, novelist, dramatist, musician, dancer and film director. The sections on the visual arts, music, literature, film and theatre, include case studies from very different cultures, contexts and settings but a central theme is that the creative arts can play a unique and crucial role in the building of peaceful and just societies, with the power to transform relationships, heal wounds, and nurture compassion and empathy. Peacebuilding and the Arts is a vital and unique resource which will stimulate critical discussion and further research, but it will also help to refine and reframe our understanding of peacebuilding. While it will undoubtedly become mandatory reading for students of Peacebuilding and the Arts, its original approach and dynamic exploratory style should attract a much wider interdisciplinary audience."
Professor Anna King, Professor of Religious Studies and Social Anthropology and Director of Research, Centre of Religion, Reconciliation and Peace (WCRRP), University of Winchester, UK

This volume explores the relationship between Peacebuilding and the Arts. Through a series of original essays, authors consider some of the ways that different art forms (including film, theatre, music, literature, dance, and other forms of visual art) can contribute to the processes and practices of building peace. This book breaks new ground, by setting out fresh ways of analysing the relationship between Peacebuilding and the Arts. Divided into five sections on the Visual Arts, Music, Literature, Film and Theatre/Dance, over 20 authors offer conceptual overviews of each art form as well as new case studies from around the globe and critical reflections on how the arts can contribute to peacebuilding. As interest in the topic increases, no other book approaches this complex relationship in the way that  Peacebuilding and the Arts does.  By bringing together the insights of scholars and practitioners working at the intersection of the arts and peacebuilding, this book develops a series of unique, critical perspectives on the interaction of diverse art forms with a range of peacebuilding endeavours.