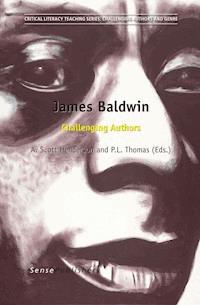 "The recognition and study of African American (AA) artists and public intellectuals often include Martin Luther King, Jr., and occasionally Booker T. Washington, W.E.B. DuBois, and Malcolm X. The literary canon also adds Ralph Ellison, Richard White, Langston Hughes, and others such as female writers Zora Neale Hurston, Maya Angelou, and Alice Walker. Yet, the acknowledgement of AA artists and public intellectuals tends to skew the voices and works of those included toward normalized portrayals that fit wellwithin foundational aspects of the American myths refl ected in and perpetuated by traditional schooling. Further, while many AA artists and public intellectuals are distorted by mainstream media, public and political characterizations, and the curriculum, several powerful AA voices are simply omitted, ignored, including James Baldwin. This edited volume gathers a collection of essays from a wide range of perspectives that confront Baldwin’s impressive and challenging canon as well as his role as a public intellectual. Contributors also explore Baldwin as a confrontational voice during his life and as an enduring call for justice."