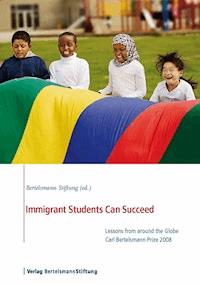 International migration is a permanent fixture of life in the 21st century. Fostering the integration of diverse populations has become a crucial policy challenge because integration greatly impacts social cohesion. Schools are the keystone in building robust integration strategies. As in so many countries around the globe, Germany's population is growing steadily more diverse. At the same time, its institutions, especially schools, have not systematically developed the tools they need to harness the potential of this diversity. Whereas some education policies and programs are fine-tuned to meet the needs of diverse student populations, others have categorically disadvantaged certain segments. As the Pisa studies have shown, students of immigrant origin are at particular risk of attaining academic achievement below their potential. The 2008 Carl Bertelsmann Prize has sought out innovative approaches to education in select OECD countries which promote the integration of children and youth of immigrant origin. The publication also includes perspectives and strategies that could improve education policies, especially in countries like Germany.

Immigrant Students and the Program for International Student Assessment (PISA)