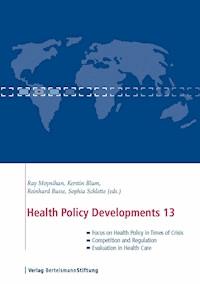 Health policy in times of crisis is one of the topics of Health Policy Developments 13 exploring the challenge the crisis has posed to health systems, but also asking whether it has provided an opportunity for reform. While some countries like Estonia drastically reduced their healthcare budgets, others, such as Austria and the United States, have responded with plans to boost public expenditure. Can the crisis provide a window of opportunity for reform? In spite of the global financial crisis, for many, confidence in market mechanisms seems not to have been shaken. One of the key assumptions of contemporary health policy debate remains: more competition will help produce systems where resources are used more efficiently. However, as governments seek to enhance market mechanisms in health systems, successful regulation is needed to facilitate those changes and avoid unintended consequences. To assess the effects of competition and regulation, as well as other reform approaches, systematic analysis is needed. Health policy evaluation, therefore, is another focus of this issue of Health Policy Developments, as well as hospital care and its coordination with other sectors, prevention and health inequalities. The International Network Health Policy and Reform aims to narrow the gap between health services research and health policy. Network partners are research institutions and health policy experts from 20 industrialized countries.