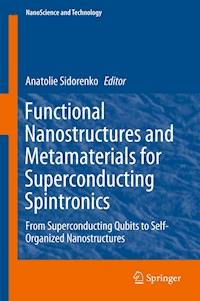 This book demonstrates how the new phenomena in the nanometer scale serve as the basis for the invention and development of novel nanoelectronic devices and how they are used for engineering nanostructures and metamaterials with unusual properties. It discusses topics such as superconducting spin-valve effect and thermal spin transport, which are important for developing spintronics; fabrication of nanostructures from antagonistic materials like ferromagnets and superconductors, which lead to a novel non-conventional  FFLO-superconducting state; calculations of functional nanostructures with an exotic triplet superconductivity, which are the basis for novel nanoelectronic devices, such as superconducting spin valve, thin-film superconducting quantum interference devices (SQUIDs) and memory-elements (MRAM). Starting with theoretical chapters about triplet superconductivity, the book then introduces new ideas and approaches in the fundamentals of superconducting electronics. It presents various quantum devices based on the new theoretical approaches, demonstrating the enormous potential of the electronics of 21st century - spintronics.

The book is useful for a broad audience, including researchers, engineers, PhD graduates, students and others wanting to gain insights into the frontiers of nanoscience.