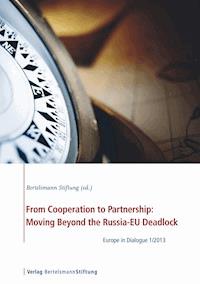 From Cooperation to Partnership: Moving Beyond the Russia-EU Deadlock ebook

Europeans can be proud as they look back on ﬁfty years of peaceful integration. Nowadays many people worldwide see the European Union as a model of how states and their citizens can work together in peace and freedom. However, this achievement does not automatically mean that the EU has the ability to deal with the problems of the future in a rapidly changing world. The European Union must continue developing its unity in diversity dynamically, be it with regard to energy issues, the euro, climate change or new types of conﬂict. Indeed, self-assertion and solidarity are key to the debates shaping our future. "Europe in Dialogue" wishes to make a contribution to these open debates. The analyses in this series subject political concepts, processes and institutions to critical scrutiny and suggest ways of reforming internal and external European policymaking so that it is ﬁt for the future. However, "Europe in Dialogue" is not merely trying to encourage an intra-European debate and makes a point of including authors from non-EU states. Looking at an issue from different angle or from afar creates a shift in perspective which, in turn, renders Europe's development more meaningful as it engages in critical dialogue with other societies.

The Deutsche Nationalbibliothek lists this publication in the

is available on the Internet at http://dnb.d-nb.de.

Russia and the European Union: Looking Back and Looking Ahead

EU-Russia Relations: A Partnership for Modernisation?

Russia and the European Union: Identities and Interpretations (Mutual Perceptions and the Construction of Identities)

Russia and the European Union. From Cooperation to Genuine Partnership. Prospects for Overcoming Stagnation in Bilateral Relations

Joint Economic Interest and Global Impact of EU and Russia

When Are We Going to Have a Common European Economic Space? Common Economic Interests and the Global Impact of the EU and Russia

The Only Reasonable “Third Way” for Russia

The Systemic Roots of Russia-EU Deadlock

The Future of Russia: From Europe to Eurasia?

The Future of Russia from a Chinese Perspective

Since spring 2013 we can be certain: Europeans and Russians are flying together to Mars. However, for quite a long time nothing as positive as this has been in evidence in the political relations between Russia and the EU. The construction of a Common European Home, which started 20 years ago to the accompaniment of high hopes and a great deal of enthusiasm, has come to a standstill. Since 2008, the two sides have been negotiating a new Partnership and Cooperation Agreement that is designed to replace the 1997 Agreement, which expired in 2007. When and whether these negotiations can reach a successful conclusion is a matter for conjecture. The relationship is clearly no longer as friendly as it used to be, and over the years the way in which the two sides talk to each other has become far more abrasive. In the run-up to the Vilnius summit in November 2013, at which the EU will be talking to its eastern neighbours, one has had the impression that we are back in the darkest days of the Cold War. Russia has issued a stern warning to the former Soviet republics, including the largest of them, Ukraine, and told them not to deepen their relations with the EU. Armenia has already backed down, and, instead of concluding an Association and Free Trade Agreement with the EU, now intends to join the Russian-led Eurasian Customs Union.

This volume is devoted to the questions of why the integration of Russia into the Euro-Atlantic community has failed to materialise, at least for the time being, and of what options are still available when it comes to improving relations between the EU and Russia. We asked eight noted experts on European-Russian relations from Russia and the EU to analyse the state of mutual relations and to suggest various ways in which they could grow and develop. Furthermore, contributors from the U.S. and China shed some light on the European-Russian relationship from a global perspective.

The results of these analyses paint a sobering picture. Although the two sides could actually benefit from each other, the EU and Russia now tend to define themselves as rivals and not as partners who are looking for a joint response to the challenges of globalisation. The reasons that the contributors adduce in order to explain this state of affairs are both complex and numerous. Thus the EU member states are primarily frustrated by the lack of progress being made in the area of modernisation, and of course by President Vladimir Putin’s authoritarian style of government. On the other hand, Russia now seems to find the Chinese approach to modernisation more attractive, especially since the EU displayed unmistakable signs of weakness during the euro crisis. However, the Chinese approach to modernisation has another undeniable advantage. It means that Russia is not going to be compelled to implement democratic reforms, and this in turn means that the power of the elites in Moscow is not going to be called into question. In the EU, people tend to overlook the fact that its modernisation strategy can be a success only if the political elites show a willingness to pursue long-term economic and welfare state goals and do not, as is still the case, spend all their time thinking about how to maintain their hold on power.

The Russians view the attempts by the EU to bring its influence to bear on the post-Soviet space with the help of Partnership and Association Agreements as hostile acts and have responded with an organisation of their own, the Eurasian Union, and by imposing quite specific sanctions. As a result of these developments, the EU is once again wrestling with a familiar dilemma. Should it jettison its value-based approach and, in keeping with the saying “He may be a son of a bitch, but he’s our son of a bitch,” conclude an Association Agreement with Ukraine without having made sufficient progress in the area of democratic reforms and the rule of law? Or should it continue to adhere to its standards, which on the one hand means that it can retain its credibility, though on the other, as things stand at present, it may persuade Ukraine to fall into line with Russia?

Here, as the contributors admit, good advice is in short supply, for there does not seem to be such a thing as a quick fix. If the EU wishes to promote democracy, the rule of law and good governance in Russia and in its immediate neighbourhood, and that is something which it no doubt considers to be of paramount importance, it needs to interact to a far greater extent with civil society in Russia and in the states in its eastern neighbourhood. And for this reason there is in fact only one thing that it can do. It needs to overcome its fears about the influx of cheap labour and liberalise the visa regime. If the interaction between EU member states and Russia can become more intense on the level of the man in the street, it may be possible to overcome prejudice, to de-ideoligise their relationship, and to embark on genuine cooperation in the area of modernisation. Quite a lot can still be achieved with youth exchange programmes and in the higher education sector, where cooperation could take the form of foreign semesters and the provision of scholarships. All this will take a long time to come to fruition. But we should start now, and not wait another 20 years.

Finally, we would like to thank the authors for their in-depth and thought-provoking analyses. We are particularly grateful to Iris Kempe, who worked tirelessly on the planning for this volume. Without her circumspect editorial support it could not have been completed.

Russia and the European Union: Looking Back and Looking Ahead

At the beginning of the previous decade, the European Union reviewed its policy options for the time after eastward enlargement. This process resulted in the development of the European Neighbourhood Policy (ENP), and in 2009 led to the introduction of the Eastern Partnership, which offered the countries of eastern Europe and the South Caucasus political association and economic integration with the European Union, but not full membership.

Moscow was also invited to participate in the ENP framework. If the Russian Federation had accepted this offer, it would have been able to move towards closer integration with the European Union. This in itself would not have led to an Association Agreement in the short term, but it would have initiated a process of gradual convergence between Russia and the European Union.