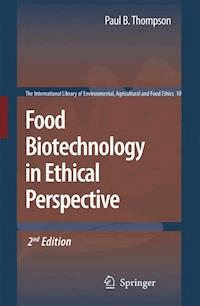 This revised edition updates Thompson’s trail-blazing study of ethical and philosophical issues raised by biotechnology. The 1997 book was the first by a philosopher to address food and agricultural biotechnology, discussing ethical issues associated with risk assessment, labelling, animal transformation, patents, and impact on traditional farming communities. The new edition addresses the debates of the intervening decade, including cloning, the Precautionary Principle, and the biotechnology debate between the United States and Europe.