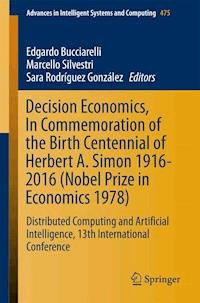 Decision Economics, In Commemoration of the Birth Centennial of Herbert A. Simon 1916-2016 (Nobel Prize in Economics 1978) ebook

The special session Decision Economics (DECON) 2016 is a scientific forum by which to share ideas, projects, researches results, models and experiences associated with the complexity of behavioral decision processes aiming at explaining socio-economic phenomena. DECON 2016 held in the University of Seville, Spain, as part of the 13th International Conference on Distributed Computing and Artificial Intelligence (DCAI) 2016.

In the tradition of Herbert A. Simon’s interdisciplinary legacy, this book dedicates itself to the interdisciplinary study of decision-making in the recognition that relevant decision-making takes place in a range of critical subject areas and research fields, including economics, finance, information systems, small and international business, management, operations, and production. Decision-making issues are of crucial importance in economics. Not surprisingly, the study of decision-making has received a growing empirical research efforts in the applied economic literature over the last sixty years. The recognition of the oversimplification and limitations of subjective expected utility theory has produced an extraordinary volume of empirical research aimed at discovering how economic agents cope with complexity. In the centenary of his birth, the international scientific community acknowledges Herbert A. Simon’s research endeavors aimed to understand the processes involved in economic decision-making and their implications for the advancement of economic studies. Within the field of decision-making, Simon’s rejection of standard decision-making models of neoclassical economics inspired social scientists worldwide to develop research programs in order to study decision-making empirically. The main achievements regarded decision-making for individual, firms, markets, governments and institution. There are many scholars in the world that claim that Herbert A. Simon has precipitated something like a revolution in microeconomics focused on the concept of decision-making. Among these scholars are the Editors of this book who believe that very few scientists produce seminal work in more than one field: Herbert A. Simon was one of them, that caliber of genius.