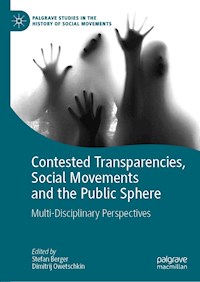 This edited collection examines the multi-faceted phenomenon of transparency, especially in its relation to social movements, from a range of multi-disciplinary viewpoints. Over the past few decades, transparency has become an omnipresent catch phrase in public and scientific debates. The volume tracks developments of ideas and practices of transparency from the eighteenth century to the current day, as well as their semantic, cultural and social preconditions. It connects analyses of the ideological implications of transparency concepts and transparency claims with their impact on the public sphere in general and on social movements in particular. In doing so, the book contributes to a better understanding of social conflicts and power relations in modern societies. The chapters are organized into four parts, covering the concept and ideology of transparency, historical and recent developments of the public sphere and media, the role of the state as an agent of surveillance, and conflicts over transparency and participation connected to social movements.