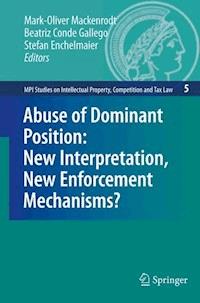 As part of its review of competition law that started in the late 1990s, the European Commission proposes to revise its interpretation and application of the Treaty’s prohibition of abuses of dominant positions. Also, it has instigated a debate about the promotion of private enforcement of EC competition law. On the former subject, the Commission published a Discussion Paper in 2005; on the latter, a Green Paper in 2005, followed by a White Paper in 2008.

The chapters in this volume critically appraise the Commission’s proposals, including the most recent ones. The authors also highlight the repercussions of the proposed ‘more economic approach’ to abuses of dominant positions on private litigants’ opportunities to bring damages actions in national courts for such abuses.