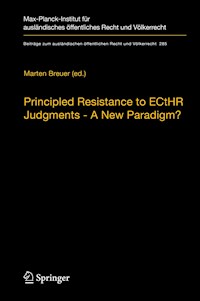 The book analyses the position of the ECtHR which has been more and more confronted with criticism coming from the national sphere, including the judiciary. This culminated in constitutional court judgments declaring a particular ECtHR judgment non-executable, for reasons of constitutional law. Existing scholarship does not differentiate enough between cases of mere political unwillingness to execute an ECtHR judgment and cases where execution is blocked for legal reasons (mainly of constitutional law nature). At the same time, the discussion under EU law on national/constitutional identity limiting the reach of the former has been only loosely linked with the ECHR context. This book presents a new dogmatic concept  - 'principled resistance' - to analyse such cases. Taking up examples from the national level, it strives to find out whether the legal reasoning behind 'principled resistance' shows enough commonalities in order to qualify such incidents as expression of a 'new paradigm'.