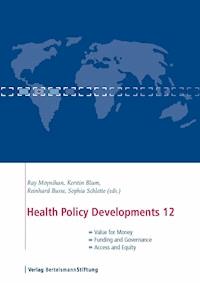 While care coordination and quality of care remain paramount policy topics everywhere, countries again turn to payment and efficiency challenges. Issue 12 of Health Policy Developments examines how health systems are trying to maximize value for money - exploring new avenues and mixing incentives. Preceding the value question there is a much simpler question: Where does the money come from? Clearly, someone needs to shoulder the burden of higher healthcare costs, but who should pay for what? Should it be private health insurers or the pharmaceutical industry as is happening in France and Australia, the whole population as it is in Finland or Canada, or should people above a certain body mass index be taxed, as in Alabama? Further topics in this issue are governance in Bismarckian systems, responsiveness of health systems to vulnerable groups, access and equity, and patient safety and quality. The International Network Health Policy and Reform aims to narrow the gap between health services research and health policy. Network partners are research institutions and health policy experts from 20 industrialized countries.