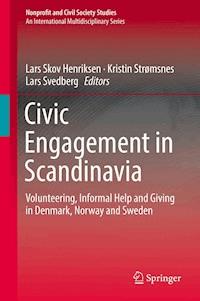 Since the 1990’s, a number of studies have documented a remarkable high and stable amount of popular engagement in civic organizations in Denmark, Norway and Sweden. Often these countries have been considered deviant cases against the proliferating decline of social capital studies.

However, despite great international interest in the Scandinavian region, the volume argues that the civil societies and the civic engagement of these countries remain poorly understood. Most interest in the Scandinavian welfare models addresses the balance between state and market, but under communicates the role played by civil society and popular engagement in associations and voluntary organizations.

The contributions offer a coherent portrait of stability and change in formal and informal forms of civic engagement over the past 25 years as well as offering contextualized knowledge of the history and institutional design in which Scandinavian civil societies are embedded.