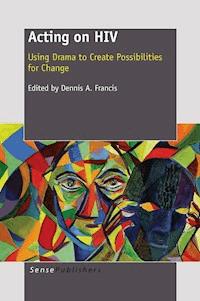 Acting on HIV offers a sustained and relatively systematic inquiry into drama as an approach to discussion of HIV/AIDS and related attitudes and behaviors. A distinctive feature of the research that is presented in Acting on HIV is the emphasis on the potential for and value of using drama to promote vital social change in addition to individual behaviour change. It has a strong theoretical foundation and seeks to interrogate the ethical, theoretical and practical complexities of using drama to address issues HIV & AIDS. The research that is communicated through the book is original and timely and will make a significant, trans-disciplinary contribution to scholarly conversations about the role/s and significance of drama in addressing issues of HIV & AIDS. Acting on HIV will have appeal to scholars working within drama and performance studies and those involved in interdisciplinary work or working in the fields of social work, education, sociology, psychology, cultural and media studies, gender studies, criminology, and critical human and social sciences generally including studies of HIV, sexuality and public health among others. Furthermore, the book targets community practitioners, teachers and researchers interested in drama for social change; arts based research methods and drama in education.