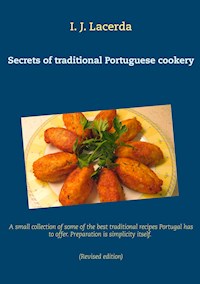 I. J. Lacerda was born in Lisbon-Portugal. He studied and worked as a journalist and interpreter in Germany and travelled in several countries of the World improving his knowledge of cookery and becoming serious about cooking.

After the experience of running his own bistros in Amsterdam and Lisbon he settled down in the Algarve-Portugal where he managed a restaurant for traditional Mediterranean-Atlantic delicatessen.

Currently he lives in the Algarve in the South-West Coast of Portugal and in Munich-Germany where he became an independent author. His books appear in different languages.

“The Mediterranean-Atlantic Diet“©2014 I. J. Lacerda

A SHORT HISTORY OF PORTUGUESE COOKERY

Olives on herbs and garlic

Stewed seafood in the pan/Cataplana

Prawns and squid on the spit

Codfish with vegetables and egg

Codfish my way (with cream)

The hunter’s hare or (wild) rabbit

Plate of meat, vegetables and sausages

Kid or Lamb stew with vegetables

Everyone who likes visiting or living in Portugal sooner or later will be interested in knowing something about traditional Portuguese cookery and the little secrets of its preparation. Eating and drinking are socially very important in the daily life of the Portuguese. A hearty meal with good wines can go some way towards improving friendships, business and politics. Discussing important plans over a good meal can lead to a successful outcome for all parties concerned. If a Portuguese invites you to a party, the party will undoubtedly be a feast!

In spite of over a million English speaking tourists visiting Portugal each year, very few books on Portuguese cookery can be found in their countries. Certainly many of those tourists long for a very special meal reminiscent of the ones they enjoyed during their visit to Portugal.

Portuguese cookery includes excellent fish and seafood dishes. It uses fresh fruit and vegetables produced by local farmers. Pork from Alentejo has a flavour all of its own (a result of the pigs feeding on acorns and truffles). Portuguese olive oil is one of the healthiest produced in Europe. The wine is for romantics and warms your soul. Portuguese cookery is versatile in its preparation and enables you to create delicious fish, seafood and meat dishes.

This book is a small collection of some of the best traditional recipes Portugal has to offer. Preparation is simplicity itself. Dishes can be created from a combination of ingredients which you may already have in your kitchen.

International cookery is drawing towards old fashioned home cooking. Portuguese cookery is the natural way of returning to this style, using seasonal ingredients.

I wish you a lot of pleasure in your cooking. “Bon appetite!”

A short history of Portuguese cookery

2000 years ago the Lusitanos as the Portuguese were called at the time were farmers and shepherds who fed themselves from the land by eating the vegetables they grew and the pigs and sheep which they reared. The Romans exported olive oil, wine and fish products (garum - fish stock) from the Iberian Peninsula. Later on, Gothic invaders introduced stews into the Iberian food culture. Southern Portugal has been influenced by the Moorish culture, which introduced a large variety of honey and almonds cakes, sweet rice and bread puddings were introduced by the Moors.

The discoveries of the 16th century brought to us, via Lisbon and Lagos in the Algarve, everything we know about exotic fruit and vegetables and spices. Cookery improved all over the country thanks to the rich nobility who had access to the best ingredients and the culinary skills which developed in many monasteries and convents. Nuns and friars collected many recipes from both home and abroad - they became the best cooks and confectioners. The farming population however, often had to sell the best of their own produce, which often left them with very little to eat themselves.

Amongst our specialities today you will find a great variety of puddings and fritters. Portuguese Jews created a sausage called Alheira de Mirandela, among other porkless products, which is a delicious garlic sausage made from venison and poultry. Tempuras, the Japanese fritters, were brought to Japan by Portuguese missionaries as a Lent tradition (the temporas). We introduced chilli peppers to Sichuan (Macau) and brought curries from India to Europe.

Around the 17th and 18th centuries the Portuguese nobility followed the French example of luxury. A “good meal” was an exotic banquet. Fantastic culinary excesses took place at the King’s Vila Viçosa palace in Alentejo, costing a small fortune, and were an insult to the starving population. Portugal had to fight against serious political and economic crises. The population began to help themselves by growing their own food and breeding cattle of high quality. They followed the rule that good food came from their own farm or from the sea. Today you will find such quality at the local markets - fish from the coast is still delicious and home reared poultry remains a good choice.

The Portuguese will have a continental breakfast rather than an English one!

The extra bite taken about 11 am consists of an Italian espresso (a bica) and a piece of cake or a muffin.

Lunch (Southerners call it almoço, Northerners jantar) is served from 1 to 3 pm. Shops and offices close for two hours at lunch time. This is the time to sit and enjoy a complete meal.

Teatime or the bite between lunch and dinner (Southerners call it lanche, Northerners merenda) will be served about 5 pm.

Dinner it’s similar to lunch; a three course meal is not unusual.

All over Portugal you will find wine bars (tascas) where you can eat snacks and light meals. Among such snacks and meals there is a large choice of fish and meat pastries, cod croquettes, vegetable samosas or fritters. You may order a small pork (bifana) or beef steak (prego), fish fritters or roast pork (carne assada) served in bread rolls. Light meals such as minced chicken in a very hot sauce (pipis), fried partridge (codornizes), tripe with white beans (dobrada), octopus salad (salada de polvo) or snails (caracóis) are some of these unusual dishes which are served on small plates.

almost every town has a Saint’s day. Over one or two days, people celebrate by going to markets, dances and eating! Depending on whether you travel to the north, middle or south of Portugal, you will find market places full of visitors and an aroma of fried chicken, roast suckling pig, grilled sardines and fritters.

Christmas and Easter also have their rituals. On Christmas Eve boiled cod with broccoli and eggs is a must. The next day relatives are invited to eat traditional stuffed turkey. At Easter Portuguese eat roast lamb and a cake (Folar da Páscoa) which has four whole eggs baked in its middle. On Easter day we offer one of these cakes to each of our godchildren. On St. Anthony, St. John and St. Peter’s day (in June) there are great celebrations in Lisbon and Porto. People dance in the streets, eat grilled sardines and drink a lot of wine. On St. Martin’s day (11th November) it is time for roasted chestnuts and tasting the year’s new wine.

Traditional Atlantic cookery needs in its preparation more fish and seafood than meat, more potatoes than noodles, more olive oil than any other fat, more fruit than ready-made desserts and some good wine.

Before you start to cook Portuguese dishes there are certain herbs and spices which you should buy, as you will use them frequently. The list below is a guide to help you so you will have a good selection in stock.

) commonly use in venison dishes