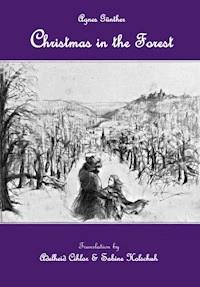 Christmas in the Forest ebook

Christmas in the Forest

Translated from the original version

On a magical Christmas Eve, deep in the forest, the impoverished Count Harro von Thorstein sees the young Princess Rosemarie for the first time. She has fled from her golden cage in Castle Brauneck, where the delicate child was raised since the death of her mother without love.

Sensing a lost soul, much as himself, Harro gains the trust of this angelic child. He is spellbound by her strong emotions and fatalistic mind, which seem much too vivid for such a young girl.

Harro is a lonely man, who lives as an artist with his faithful servant in the dark ruins of his castle, but light comes into his world as he finds his little “Saint Rose”.

"A unique book" - this is how the 1913 published novel Die Heilige und ihr Narr by Agnes Günther (1863-1911) has been described. Still being in print today with the 144th edition and translated into eleven languages, indeed proves the exceptional success of this book.

Only the first chapter had been printed during the author’s lifetime, as a separate Christmas edition on Dec 24th in 1908 in "The Christian World ", and was thereafter repeatedly brought out as a special edition.

Resuming this tradition, Adelheid Cihlar and Sabine Holschuh , now present the first chapter in English – a task that has been long overdue.

Agnes Günther has aptly described our beautiful homeland Hohenlohe with all its benefits.

I wish the readers of this booklet much enjoyment – in pleasant anticipation of the completion, “The Saint and her Fool”.

This book is also available in the German language:

All rights reserved, including the right of reproduction, in whole or in part, in any form.

Also available in printed version with

We would like to express our deepest thanks to Heide Ruopp, who lives in Langenburg, Germany - the original site of the story. Her passion for the book “Die Heilige und ihr Narr”, written by Agnes Günther, has inspired us to the heights and depths necessary to not only translate, yet feel and be part of the story. She was indeed the soul, eyes and the voice of the author, bringing her back to life for us.

We also thank the artist, Susanne Rudolph, for the magnificent drawing of this introductory chapter. She was able to capture not only the dramatic atmosphere of the surroundings, but has also brought our little “Saint Rose” to visible life.

Christmas in the Forest

For days a dense fog lingered among the trees in the forest. Now a sudden drop in temperature, a bitter chill, has transformed the thick dampness and embellished the trees, attiring each in a rigid, yet glittering, festive Christmas gown. The old stone pines, standing high on a vast hill, seem to be decorated for the holiday season with their icy pine cones hanging down like jewellery. Their branches are low, bent to the ground by their heavy burden, forming a secret nest in which, one could imagine, a freezing little rabbit or fawn might find shelter.

The birch trees are covered with countless crystal beads and white frost clings to their feathered branches, in particular where a leaf bud awaits the oncoming spring. It is as if the trees are longing to have their May in the midst of winter although the bloom, now, is silver.

Each mossy spot along the path, the thorn bush there with its red berries still shining out from under its crystal branches, each one of them has put on festive attire. How dainty and delicate is the thistle with its silver crown, and the blackthorn has become the masterpiece of an elf silversmith. All is quiet; only here and there a fine tinkling can be heard, or a sigh, as a branch shakes off a portion of the load that has become too heavy to bear. The beech trees seem to have resumed their canopy over the path, as in summer, only now creating the fine white, silver and crystal dome of a forest cathedral above. A wonderful soft light glitters through the misty grey sky, the mere hint of a frosted golden sun.

The hazel bush has been decorated with silver ribbons, their peculiar coils and curves connecting the branches. These are the silky cobwebs of a spider which now hangs lifeless as a withered leaf over her still sleeping child. And how amazed would the diligent spinner be to see the wondrous result of her cocoon.A bird flutters up and a cloud of tiny silver stars whisk up into the air, only to settle down onto the ground, trimming the path that had been so bare and brown.

High on the hill upon which the old stone pines stand a tall man appears and strides towards the cathedral of beech trees. He is dressed in an olive greenwaistcoat and has ashabby felt hat on his curly brown hair. From under the old hat his grey-blue eyes shine out in admiration of the splendor surrounding him. The first impression of this man might only take in his remarkable tall and muscular appearance, but a mere glimpse into his eyes would reveal his most striking feature; for these are eyes that not only see but, rather, behold,as if absorbing the reflections of the forest: the fine silver-clad rows of beech trees, distantly illuminated by the frosted light of the sky.

“Eyes, my window to the world … take it all in. Oh, eyes, behold as much as you can of the world’s golden abundance,” he sighed, it making no difference him that the abundance before him was silver right now.