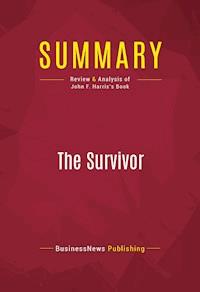 The must-read summary of John F. Harris's book: “The Survivor: Bill Clinton in the White House”.This complete summary of "The Survivor" by John F. Harris, an American political journalist, presents the author's insight into President Clinton's background and aspirations. He follows Clinton from the beginning to his relatively triumphant exit from the office. He argues that despite the personal failings in the office Clinton had remarkable statistics and managed to achieve a budget surplus.Added-value of this summary:• Save time• Understand Clinton's presidency in this comprehensive account• Expand your knowledge of American politics and historyTo learn more, read "The Survivor" and discover the full story of one of America's most accomplished, controversial and polarizing figures.

America’s 42nd president, William J. Clinton, possessed impressive strengths and many weaknesses. He is one of the most charismatic and enigmatic political figures of the last 50 years. In The Survivor, Harris appraises Clinton’s background and aspirations to explain many of the President’s frequent shifts in direction, including health care reform, welfare reform, his stance on terrorism and other foreign policy matters.

Despite Clinton’s personal failings in office, even his detractors must recognize the remarkable statistics of his term: the lowest unemployment rate in modern times, the lowest inflation in 30 years, the highest home ownership in the country’s history, dropping crime rates and reduced welfare roles. Clinton also balanced the budget and achieved a budget surplus. Harris follows Clinton from his first fumbling years in office to a relatively triumphant exit from office.

John F. Harris, a political reporter for the Washington Post, covered the Clinton presidency from 1995 though its conclusion in 2001. His balanced writing about the ups and downs of the administration earned him several prestigious awards, including the White House Correspondents’ Association’s Aldo Beckman Award and the Prize for Distinguished Reporting on the Presidency from the Gerald R. Ford Library. Harris is also a panelist on PBS’s Washington Week.

Bill Clinton had been eying the White House since the time he was a young child and had set himself on the path to a political life. His humble beginnings in Arkansas grounded him as he later went on to meet President John F. Kennedy and study at Georgetown University, Oxford and Yale.

He married a brilliant young lawyer named Hillary Rodham and together they set out to conquer the political landscape, introducing the country to a New Democratic party. Clinton became the governor of Arkansas in 1978, lost his reelection campaign, but served again until defeating incumbent George H. W. Bush and Ross Perot for the White House in 1992.