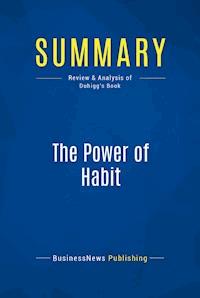 Summary: The Power of Habit ebook

The must-read summary of Charles Duhigg's book: "The Power of Habit: Why We Do What We Do in Life and Business".

This complete summary of the ideas from Charles Duhigg’s book "The Power of Habit: Why We Do What We Do in Life and Business" tells you how you can change your habits for the better just by understanding how they work. There is a basic ‘Habit Loop’ for all habits: clue, routine and reward. According to Duhigg, there are four steps you can follow that serve as a starting point for changing your habits; identify your routines, experiment with different rewards, isolate the trigger and develop a new plan. This process will take time and effort, but it is possible.

Added-value of this summary:
• Save time
• Understand how your habits work
• Change your habits for the better

To learn more, read “The Power of Habit” to start understanding your habits and gain control!

Book Presentation: The Power Of Habit by Charles Duhigg

Summary of The Power Of Habit (Charles Duhigg)

Book Presentation: The Power Of Habit by Charles Duhigg

Habits can be changed if you understand how they work. At the core of every habit you have lies a reasonably simple neurological loop:

If you want to change and reshape your habits for the better:

Identify the routines you currently follow – and figure out how you can change your routines so you swap vices for virtues.Experiment with different rewards – until you can isolate what you're actually craving when you do something habitually. If you can figure out what you're genuinely craving, then you understand how to make a desired behavior automatic.Isolate the cue that triggers your habit – what it is that signals it's time to do something. There are in practice only five types of cues: location, time, your emotional state, other people or an immediately preceding action. Figure out what sparks your habit to occur.Then develop a new plan – for what you'll do differently the next time that cue arises. When you get right down to basics, habits are formulas your brain automatically follows: When you see a CUE, you do a ROUTINE in order to get the REWARD. To change your habit, keep the cue and the reward the same and insert a new routine.

“Obviously, changing some habits can be more difficult. But this framework is the place to start. Sometimes change takes a long time. Sometimes it requires repeated experiments and failure. But once you understand how a habit operates – once you diagnose the cue, the routine and the reward – you gain power over it. Transforming a habit isn't necessarily easy or quick. It isn't always simple. But it is possible. And now we understand how.”

CHARLES DUHIGG is a reporter for the New York Times where he has been a contributor to a Pulitzer Prize winning series titled "The iEconomy." He is a graduate of Yale University and Harvard Business School. In addition to having his articles published, he has also appeared on several TV shows including This American Life, The Newshour with Jim Lehr and Frontline. Before becoming a journalist, he worked in a private equity firm and founded an education management business.

Summary of The Power Of Habit (Charles Duhigg)

1. How habits form in the lives of individuals

It has been estimated that more than 40 percent of the actions you perform every day are the result of your habits rather than deliberate decisions you're making. With that in mind, it makes sense to get to understand how habits form and work. It's all due to the operation of the "Habit Loop" – you see a cue and you therefore follow a routine to get the reward you crave. To build new habits or change old ones, keep the cue and the reward the same and look for ways to swap out old routines for new and improved routines.

What is a habit? Technically, it can be defined as the situation where you make a deliberate decision at some point to do something and then stop thinking about your choice as you continue to follow the same routine over and over. With habits, what you do becomes automatic rather than requiring you to decide what to do each time.

Researchers at MIT started studying habits in earnest in the 1990s and since that time have been able to show the section of the brain which is involved in habit formation is known as the basal ganglia. If you visualize the brain as an onion, the outer layers (near the scalp) are the most recent additions from an evolutionary perspective. These outer layers handle creative thinking and social interactions. The basal ganglia is one of the innermost layers and is roughly the size of a golf ball in the center of the skull.