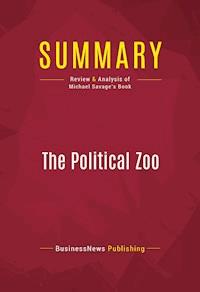 The must-read summary of Michael Savage's book: "The Political Zoo".This complete summary of "The Political Zoo" by Michael Savage, a renowned author and activist, presents his analogy of a zoo to portray the variety of political views that are currently in play in Washington. In his book, the author claims that this zoo analogy is appropriate as, much like zoo animals, Washington politicians act as though they are wild for their visitors: but they have become rather accustomed to their opulent diets and comfortable cages.Added-value of this summary:• Save time• Understand political opinion and behaviour in Washington• Expand your knowledge of American politicsTo learn more, read "The Political Zoo" and discover more about the politicians running America.

Using the analogy of a zoo to describe the variety of political views at play in Washington, Savage chooses the pelts and feathers most appropriate to symbolize the behavior and philosophies of America’s current administration and their opposition. Savage asserts that this zoo analogy is appropriate because, much like zoo animals, Washington politicos act as though they are wild for their visitors, but have actually grown much attached to their opulent diets and comfy cages.

Nationally syndicated and airing on 350 radio stations coast-to-coast, Michael Savage has over 10 million weekly listeners. Savage has been a factory worker, teacher, social worker, medicinal plant explorer and biologist. Holding Master’s degrees in medical botany and medical anthropology as well as a PhD in epidemiology and nutrition science from Berkeley, Savage’s approach to issues draws on his science and social science experiences.

Even though the braying donkeys in the zoo supported the Bumbler initially, they quickly became jaundiced and began complaining that the war wasn’t “truly over” in four days. They began braying in unison with Howling Howie Dean, the donkey candidate, and attacking the Bumbler on things such as the exact location of WMDs in Iraq.