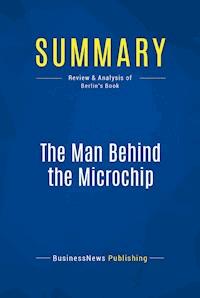 Summary: The Man Behind the Microchip ebook

The must-read summary of Leslie Berlin's book: "The Man Behind the Microchip: Robert Noyce and the Invention of Silicon Valley".This complete summary of the ideas from Leslie Berlin's book "The Man Behind the Microchip" tells the story of a giant of the high-tech industry: the multimillionaire, Bob Noyce. This co-founder of Fairchild Semiconductor and Intel co-invented the integrated circuit which became the electronic heart of every modern computer, automobile, advanced weapon and video game. In this book, the author tells all about the life of this individual, as well as the interconnection of business, money, politics, and technology that belongs to Silicon Valley. This summary is a must-read for anyone who wants to gain an insight into the dynamic world of high-tech entrepreneurship.Added-value of this summary:• Save time• Understand key concepts• Expand your knowledgeTo learn more, read "The Man Behind the Microchip" and discover the fascinating story behind one of the most important figures in the semiconductor industry.

Book Presentation: The Man Behind the Microchip by Leslie Berlin

Summary of The Man Behind the Microchip (Leslie Berlin)

5. The Founding of Intel

Book Presentation: The Man Behind the Microchip by Leslie Berlin

LESLIE BERLIN is a visiting scholar in the History and Philosophy of Science and Technology at Stanford. She is also project historian for the Silicon Valley Archives, a division of the Stanford University Department of Special Collections. Dr. Berlin is a graduate of Stanford and Yale. This is her first book.

The Web site for this book is atwww.themanbehindthemicrochip.com.

Summary of The Man Behind the Microchip (Leslie Berlin)

Robert Noyce was born on December 12, 1927 in Burlington, Iowa. His father Ralph was a minister of religion for the Congregational Church. Harriet, his mother, was previously a teacher in high-school before she became a full-time homemaker. Robert distinguished himself as a high-spirited youth, but always managed to maintain a straight-A record in high school. (He never scored less than 96-percent in either science or math despite the fact he never seemed to pay much attention in class).

As a youth, Robert Noyce was absolutely fascinated by airplanes. In one memorable incident, when Noyce was twelve, he talked his fourteen-year-old brother into helping him build a glider from bamboo and cheesecloth using an illustration they found in an encyclopedia as a guide. When the glider was finished, it stood about 1.5 meters tall with a wing span of about 6 meters. They convinced one of their friends who had just obtained a driver’s license to tow them down a street fast enough to get the glider aloft. The brief flight turned out to be more terrifying than it was effective.

Despite being offered a position at Miami University of Ohio, Bob Noyce decided to go to Grinnell College near his home. His college years were a flurry of activity where in addition to a full course load, he also play bridge, attended dozens of lectures, served on the yearbook team, attended musical performances, starred in a campus radio melodrama and studied detailed reports about the recent development of the atomic bomb. He also joined the college diving team, where he earned his college letter. In one memorable incident, Noyce and a friend went out and stole a pig from a local farm to be roasted on a spit in his residence hall’s party. The pig turned out to belong to the local mayor, who wanted Noyce expelled from Grinnell. In the end, Noyce was expelled for one semester as punishment.

At about the same time as Noyce returned to Grinnell for the final semesters of his senior year, Bell Labs announced the invention of the transistor – a solid-state device which could amplify electronic signals without using the vacuum tubes then commonly used in electronic devices. Noyce and his physics teacher, Grant Gale, poured over the technical reports Bell Labs released describing these devices, and thought about the potential applications this opened up. Partly as a result of this but also due to the fact he was unable to join the air force because he was color blind, when Noyce graduated from Grinnell College with a double major in math and physics and a Phi Beta Kappa key, he decided to apply to join the doctoral program in Physics at the Massachusetts Institute of Technology (MIT).

By the time Noyce came to MIT, the university’s efforts to build a world-class physics department were well advanced. MIT was at the epicenter of what would later become called the U.S. “military-industrial complex”. During the Second World War, MIT had received $117 million in federal research grants. MIT professors had helped develop several important technologies including radar and the atomic bomb. MIT faculty commonly served on presidential commissions and in the boardrooms of some of the nation’s largest and most powerful corporations. For Noyce, MIT was a huge culture shock after the much smaller Grinnell College, a fact emphasized by the fact for the first time in his life, Noyce actually failed some assessment tests in physics. He was required to take a two-semester undergraduate course to catch up.

Also for the first time in his life, Noyce was forced to study at MIT. He had always prided himself that in maths and physics, you didn’t need to memorize the answers in advance because you could always derive the correct answers from your existing knowledge of basic scientific principles. At MIT, Noyce found he didn’t have as thorough a knowledge of the basic principles as his peers. He spent the first semester cramming new information into his mind. The success of this was soon evident because after his first semester, Robert Noyce passed every course he took at MIT with honors.