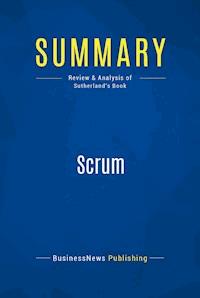 The must-read summary of Jeff Sutherland's book: "Scrum: The Art of Doing Twice the Work in Half the Time".

This complete summary of the ideas from Jeff Sutherland's book "Scrum" shows how the conventional way of doing product development is broken and introduces a new method - SCRUM. Rather than sticking to a top-down, prescriptive approach, the SCRUM method is adaptive and evolutionary, giving you a new and improved way to do projects. The author explains the inspiration behind the SCRUM method and how to apply it to your business most effectively. Learn how to save time, work efficiently and stay organised with this concise summary.

Added-value of this summary:
• Save time
• Understand the key concepts
• Increase your business knowledge

To learn more, read "Scrum" and discover how to develop projects more efficiently, saving you time and money.

The conventional way of doing product development is broken. The "Waterfall Method" – break a large project down into step-by-step chunks and schedule them on a Gantt chart – doesn't work. Almost without fail, waterfall method projects fall behind schedule, go over budget and run the risk of generating products nobody wants or will pay for when completed.

SCRUM was developed in 1993 as a new and improved way to do projects. It is designed to be evolutionary and adaptive rather than top-down and prescriptive. SCRUM was initially used with great success in the software industry but has now been used successfully in almost every industry across the board.

SCRUM draws on the advantages of the Toyota Production System and the OODA loop used in combat aviation. SCRUM organizes around small teams – the most effective way to work – who prioritize what needs to be done and then run one-to two-week sprints to gain momentum and make everyone accountable. These teams stay organized by holding brief daily stand-up meetings where everyone can share tips, get help on challenges which crop up and be accountable.

"I first created Scrum, with Ken Schwaber, twenty years ago, as a faster, more reliable, more effective way to create software in the tech industry. Scrum is a radical change from the prescriptive, top-down project management methodologies of the past, Scrum, instead, is akin to evolutionary, adaptive, and self-correcting systems. We've used Scrum to build everything from affordable 100-miles-per-gallon cars to bringing the FBI database systems into the twenty-first century. I firmly believe Scrum can help to revolutionize how business works in virtually every industry."

JEFF SUTHERLAND is the inventor and co-creator of SCRUM, the most widely used Agile planning technique in the world. He started his career as a fighter pilot in the US Air Force and flew combat missions in Vietnam. After 11 years as a pilot, Jeff Sutherland then joined the faculty of the University of Colorado Medical School where he co-founded a cancer research center, secured research grants and ran IT programs. He was then recruited by a banking company operating 150 banks to be general manager of their fledgling ATM business unit. To date, he has served as VP of Engineering or as Chief Technology Officer for eleven software companies. In 2006, he established his own training company, Scrum, Inc., to provide coaching on the Scrum planning methodology. Jeff Sutherland is a graduate of West Point, Stanford University and the University of Colorado School of Medicine.

This is a summary and not a critique or a review of the book. It does not offer judgment or opinion on the content of the book. This summary may not be organized chapter-wise but is an overview of the main ideas, view points and arguments from the book as a whole. This means that the organization of this summary is not a representation of the book.

Top-down planning where the boss specifies what should be done and when (using color-coded charts) plain doesn't work. All you end up with is an illusion of planning which fools no one. You should understand planning is useful but blindly following plans is stupid.

The conventional way to plan a project usually goes something like this: