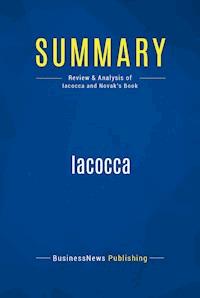 The must-read summary of Lee Iacocca and William Novak's book: "Iacocca: An Autobiography".This complete summary of the ideas from Lee Iacocca and William Novak's book "Iacocca" tells the story of Lee Iacocca and his career as a general manager for the world's biggest car companies. In their book, the authors reveal how Iacocca dealt with the massive challenges of the motor industry and how he took Chrysler and turned it around, leading it to $925 million profit in 1983. This summary also explains Iacocca's vision for the future: more investment in students who want to go into technology, investment in the national transport infrastructure and encouraging greener energy.Added-value of this summary:• Save time• Understand key concepts• Expand your business knowledgeTo learn more, read "Iacocca" and discover the secrets behind the success of this ground-breaking general manager.

Iacocca’s father, Nicola, arrived in America in 1902 at the age of twelve – poor, alone and scared. He returned to Italy to marry Antoinette and returned to America as a new American citizen. Nicola saw America as the land of freedom – the freedom to become anything you wanted to be, if you wanted it bad enough and were willing to work for it.

Lee Iacocca was born 15th October 1924. By that time, his father had opened a hot-dog restaurant in Allentown. He drilled two principles into Lee; never get into a capital-intensive business because the bankers will end up owning you. And when times get tough, get into a food business because people will always need to eat. (Lee came very close to actually starting a food franchise in 1952, long before McDonalds was a gleam in Ray Kroc’s eye. He decided against it in the end).

As a teenager, Lee worked outside a hotel offering to take people’s shopping home for them. He also had a weekend job in a fruit market for which he was paid $2 per day plus all the fruit and vegetables he could carry home with him.

His father was passionately involved in motor vehicles, and invested in a very early car rental business called U-Drive-It. This soon built up to a fleet of 30 cars. By the time Lee was 15 years old, he had decided that his future lay in the automobile business and all his energies were directed towards that goal.

Lee credits his father with his instinct for marketing. He owned a couple of movie theatres which were widely known for special offers. People still talk about the day he announced that the ten kids with the dirtiest faces would be admitted free.

In the 1920’s, the Iacocca family did very well. Then came the Depression. The Iacocca’s survived, but that was about all. His father got quite a shock when he saw all the money he had made lost almost overnight. He did, however, have a lot of irons in the fire which enabled him to weather the worst of the Depression. He had always kept to a very strict policy of paying for things as he went along, refusing to allow any of the family to charge anything or even possess a credit card. He insisted on his children paying back any money they borrowed from anyone else.

Some of his father’s favourite sayings included;

“You’ve got to accept a little sorrow in life. You’ll never really know what happiness is unless you have something to compare it to.”“If you borrow anything, be sure to write it down so you won’t forget to pay it back.”“It looks bad right now, but remember, this too shall pass.”“Why walk when you can run?”“If he’s bigger than you are, don’t fight back. Use your head instead of your fists.”

Lee was 11 years old before he realized he was Italian. He remembered actually looking on a map of Europe for places named Dago and Wop. Being exposed to bigotry as a kid left its mark, and even today still leaves a bad taste in Lee’s mouth. Prejudice was not limited just to school, but invaded every area of Lee’s life.

The most important thing he learned in school was how to communicate. He learnt how to write clearly, speak in public and how to increase his vocabulary. Joining the debating team was a great move, as it taught how to express ideas well and how to think on your feet.

While recovering from a bout of rheumatic fever, Lee started reading books. This soon became a passion for reading everything he could get his hands on. This had a good effect on school grades and he graduated near the top of all his high school classes. Extracurricular activities included big band music, drama club, debating teams, Latin club, baseball, politics and plying the tenor sax.

Lee was in the middle of his senior high school year when Japan attacked Pearl Harbour. He couldn’t wait to join up but he was classified as medically deferred due to his bout of Rheumatic fever. Most of his classmates were called up, however, and many of them died. Lee felt disgraced and a second-class citizen. He buried his head in his books.

Lee decided to go into engineering and after being turned down by Purdue University, he went to Lehigh University in Bethlehem, Pennsylvania (about half an hour’s drive from his family home Allentown).

While at College, Lee established a time schedule that has stuck with him ever since. He works hard Monday to Friday afternoon, takes the weekend off for his family and then outlines his goals for the coming week every Sunday night. He works on the principle that you have to decide on your priorities and give it all you’ve got.

The war was a blessing in disguise for Lee. Classes that normally had fifty students often had only five students while everyone was away fighting. This meant he received a very high quality education. Lee changed his major from Mechanical to industrial engineering and eventually to business courses such as labour problems, statistics and accounting. He graduated with high honours. He also took courses in psychology and abnormal psychology.

Even before graduating, Lee decided he wanted to work for Ford. This was simply because he drove a 1938 Ford. He used to joke with his friends while driving his car, “These guys need me. Anybody who can build a car this bad can use some help.” In those days, owning a car was an excellent way to learn about them, as the war made all spare parts very scarce. There was also a shortage of gas. Lee went to see the Ford recruiter, went through the interviews and was eventually selected to begin working for Ford.

3. Getting My Feet Wet