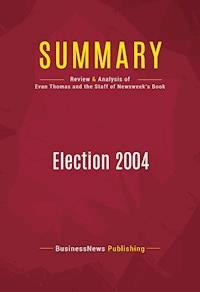 The must-read summary of Evan Thomas and the staff of Newsweek's book: “Election 2004: How Bush Won and What you Can Expect In the Future”.

This complete summary of "Election 2004" presents the book's overview of the key events of the 2004 presidential campaign. The staff of Newsweek had access to all areas of the campaigns and were present at the events that decided the outcome.

Added-value of this summary:
• Save time
• Understand the key events of the run-up to the 2004 presidential election
• Expand your knowledge of American politics

To learn more, read "Election 2004" and discover the inner workings of the Republican and Democrat presidential campaigns, as revealed by Newsweek journalists.

Book Presentation: Election 2004 by Evan Thomas and the Staff of Newsweek

Election 2004: How Bush Won and What You Can Expect in the Future is an overview of various key events during the 2004 campaign that the authors point out as reasons why Bush ultimately won. The book is an insider’s look into the problems and theories that a campaign team faces and the crucial decisions that must be made throughout a campaign.

Election 2004 gives readers the chance to see the decision making process that takes place concerning speech, appearance and conduct of the candidates behind the scenes. The book also examines how important these decisions can be and what consequences can result when choosing the wrong course of action.

Evan Thomas is currently the assistant managing editor at Newsweek. Since April 1991, he has worked on over 100 cover stories for the magazine. Thomas is the author of several books including Robert Kennedy: His Life and the bestselling John Paul Jones: Sailor, Hero, and Father of the American Navy. Additionally, Thomas is the author of Back from the Dead: How Clinton Survived the Republican Revolution, a campaign chronicle of the 1996 election.

Summary of Election 2004 (Evan Thomas and the Staff of Newsweek)

How Bush Did It

The political family is a tradition in United States history and in the 2004 election, two families based in politics, the Bushes and the Kerrys, sparred against each other.

These families were both lead by men desiring the position of Commander In Chief of the United States. These men, George W. Bush and John F. Kerry, seemed destined to meet in this particular race as can be foreshadowed in the previous events of their lives.

Both men went to Yale University. The “when” and “how” or “if they even had” met while both were at Yale is still unconfirmed. However, Kerry recalled Bush at Yale, “he was two years behind me at Yale, and I knew him, and he’s still the same guy.” Although they went to the same university and were in similar organizations, the two men were not on the same path in life.

Kerry is known to be very complex and has proven his toughness and resilience in war and politics, yet Kerry’s campaign was unwieldy and clumsy. On the other hand, Bush, a once wild and undisciplined frat boy, was contrary to his past. His campaign was clever, organized and fast to respond.

The Democrats: Fits and Starts

The beginning of John Kerry’s campaign was full of conflict. The campaign bus slogan “Courage Equals Kerry” troubled Kerry. He did not want to ride the bus that he felt tried glorify his combat experience. Kerry was not comfortable with advertising his combat record.