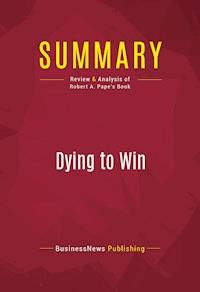 The must-read summary of Robert A. Pape's book: "Dying to Win: The Strategic Logic of Suicide Terrorism".

This complete summary of "Dying to Win" by Robert A. Pape, a renowned political scientist, provides a history of suicide terrorism and a new perspective on what we already know about this topic. In his book, the author presents his findings based on documented fact and calls into question the reasons behind these attacks.

Added-value of this summary:
• Save time
• Understand terrorist attacks throughout history
• Expand your knowledge of politics and history

To learn more, read "Dying to Win" and find out more about the history of suicide terrorism and the reasons behind it.

Book Presentation: Dying to Win by Robert A. Pape

The American public and America’s politicians seem convinced that the major problem between Arab countries and the United States are caused by the adherents to Islam and that religion’s belief in “holy wars.” Pape set out to determine whether this conclusion was correct. He collected extensive information on suicide bombings committed between 1980 and 2003 around the world. This data was entered into a database for analysis. What Pape discovered disproved the relationship between Islam, or religion in general, and the bombings. Pape found that 96 percent of suicides were part of larger coherent political or military campaigns whose specific goal was to compel modern democracies to withdraw their military forces from territories the suicide bombers regard as their homeland.

Expurgating the who, what, why and how of suicide bombers as well as predicting their propensities in the future is the focus of Dying to Win.

Associate Professor of Political Science at the University of Chicago, Robert A. Pape teaches international politics and serves as the Director of the Project on Suicide Terrorism. Pape contributes to The New York Times, Foreign Affairs, The New Republic, The Washington Post, as well as national television and radio programs.

Summary of Dying to Win

Suicide terrorism is rising around the world. Many attacks, or at least those most publicized, were conducted by Muslim terrorists with ostensibly religious motives. For this reason, the conclusion that eliminating Islamic theocracies and replacing them with democracies seemed a way to prevent future terrorist attacks. Professor Pape set out to determine if making democracies out of monarchies, theocracies or other Arab governance forms would stop terrorist attacks. Over 315 attacks from all over the world were carefully researched and put into a database.