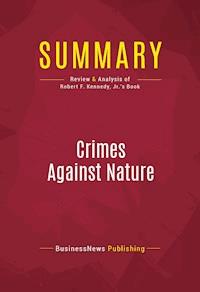 The must-read summary of Robert F. Kennedy, Jr.'s book: “Crimes Against Nature: How George W. Bush and His Corporate Pals Are Plundering the Country and Hijacking our Democracy”.This complete summary of "Crimes Against Nature" by Robert F. Kennedy, Jr., a media personality and environmental activist, outlines the writer's argument that the Bush Administration has privileged corporate greed and has neglected to respect law, public health, and even long term economic vitality. He states that national security is at risk and that corporate capitalism has trampled free-market democracy.Added-value of this summary:• Save time• Understand the implications of the decisions made by the Bush administration• Expand your knowledge of American politicsTo learn more, read "Crimes Against Nature" and discover how the Bush administration endangered national security and ignored economic and environmental issues.

In Crimes Against Nature, Robert F. Kennedy, Jr. charges that the Bush Administration has taken corporate cronyism to such extraordinary heights that it now threatens our health, our national security, and our democracy as we know it. Kennedy believes that this administration has ignored the laws that have protected our nation’s environment for the past 30 years in order to enrich the president’s political contributors. This has resulted in the quality of life being lowered for the rest of America.

Crimes Against Nature disputes that Bush’s policies are neither free market, democratic, conservative or particularly Christian in their treatment of our shared resources domestically and globally. Kennedy ultimately argues that this administration has sacrificed respect for the law, public health, scientific integrity, and long-term economic vitality for corporate greed.

Robert F. Kennedy, Jr. is the senior attorney for the Natural Resources Defense Council, chief prosecuting attorney for Riverkeeper, and President of the Waterkeeper Alliance. He is also a clinical professor and supervising attorney at the Environmental Litigation Clinic at Pace University of Law. He was an assistant district attorney for New York City and coauthor of The Riverkeepers: Two Activists Fight to Reclaim Our Environment as a Basic Human Right.

THE MESS IN TEXAS

The Houston Ship Channel is lined with more than 100 large scale pollution factories. Refineries, chemical companies and power plants relentlessly pour their toxins into the air and the ocean around them. They generate more money than the domestic product of some nations. They used to be held in check by plaintiff’s attorneys and Texas laws. “Don’t Mess With Texas” wasn’t a slogan, it was a philosophy under the previous Democratic governors of Texas who were trying to clean the state up. Under George W. Bush, that same phrase should have been amended to “Pay and Make a Mess out of Texas.”

Texas is now the most polluted state in the country and Houston now has more smog alerts than Los Angeles. Twenty-five percent of Texas rivers are so polluted that they don’t meet the standards for recreational usage. Texas is number one in toxic emissions, first in chemical accidents and first in cancer-causing pollutants. Texas produces the largest volume of hazardous waste in the country and 10 percent of the CO2 in the country. Texas also has the highest rate of childhood asthma and cancer.