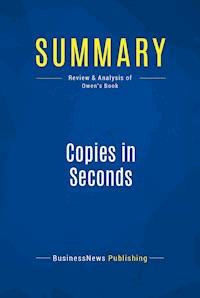 The must-read summary of David Owen's book: "Copies in Seconds: How a Lone Inventor and an Unknown Company Created the Biggest Communication Breakthrough Since Gutenberg – Chester Carlson and the Birth of the Xerox Machine”.

This complete summary of the ideas from David Owen's book "Copies in Seconds" tells the fascinating history of copying documents. In his book, David Owen recounts the creation of the first plain-paper office copier and the life story of the man behind it, Chester Carlson. Introduced in 1960, the Xerox machine has been recognised as one of the most remarkable products ever marketed in America.

Added-value of this summary:
• Save time
• Understand key concepts
• Expand your knowledge

To learn more, read "Copies in Seconds" to discover an inspiring story about courage, ambition and technological innovation.

DAVID OWEN is a staff writer for The New Yorker. He is the author of a dozen books including The Making of the Masters, The Chosen One, The First National Bank of Dad and Hit & Hope.

“Office copying as we know it didn’t arrive until 1960, when a small photographic supply company in Rochester, New York, shipped the first Haloid Xerox 914 Office Copier. The 914’s manufacturer, which had started life as the Haloid Company, is known today as the Xerox Corporation. The 914 employed a copying process that was revolutionarily different from anything used in machines made by other companies; that process was called xerography, and unlike all competing techniques, it made sharp, permanent copies on ordinary paper. The 914, furthermore, was simple enough for a child to operate. Essentially overnight, people began making copies at a rate that was orders of magnitude faster than anyone had believed possible.”

Chester Floyd Carlson, the inventor of xerography, was born in Seattle, Washington on February 8, 1906. His father Olof (the son of Swedish immigrants) supported his family as a barber until he contracted tuberculosis and arthritis. From that time on, his father’s ill health would dominate Chester’s life as the family moved from Washington to California to Arizona and then eventually to Mexico in search of a climate which would be bearable for his father. When the Mexican Revolution commenced in November 1910, the family moved back to Los Angeles.

By the time he was at high school, Chester Carlson had become his family’s principal provider. He would rise each morning at four o’clock so he could work two or three hours before school and then when classes ended, he would go to work again. In addition to working as a janitor for a number of local businesses, he also did a variety of odd jobs. The $50 or $60 a month he was earning was all his family had to survive on. Yet, despite these hardships, Chester made good grades and he began to think about a future as an inventor.

“It looked very doubtful if I could ever go to college and still my interests were in things that almost required a college education to make anything out of them. Invention was one chance to start with nothing and end up with a fortune. I had read of Edison and other successful inventors, and the idea of making an invention appealed to me as one of the few available means to accomplish a change in one’s economic status, while at the same time bringing to focus my interest in technical things and making it possible to make a contribution to society as well.”

At age 15, Chester started jotting down his ideas for new inventions in a pocket diary. He envisaged a rotating billboard, a machine for cleaning shoes, a fastener for bags and clothing, a new type of lipstick and a disposable handkerchief. Chester was particularly fascinated, however, by printing and the graphic arts. He had even started publishing his own newspaper at age 10 which he painstaking typed out on a Simplex toy typewriter (which had a manually operated print wheel instead of a keyboard). Since there was only one copy, he included a routing list and asked each person who read the newspaper to pass it along after finishing it.

One of Chester’s part-time jobs was cleaning the offices of a local printer. His employer actually allowed him to take home an old superseded printing press in lieu of a paycheck. Chester had grand visions of publishing a new magazine he would call The Amateur Chemists’ Press which he intended to sell subscriptions for 65-cents for six months. He found, however, that setting the type for a single issue required about a week of close and tedious work and then the printing process itself was powered by a foot pedal that was very hard to operate. He gave up after two or three issues.

– Chester Carlson in a 1965 interview

During Chester’s junior year at high school (when he was aged 17), his mother died of tuberculosis at the age of fifty-three. This was a crushing blow for Chester because he depended on his mother for moral support. It also meant the entire burden of looking after his invalided father now feel on him. Chester looked for more part-time work, but to save money, he and his father moved to a former chicken coop which consisted of a single room with a concrete floor. In order to avoid catching tuberculosis from his father, Chester would sleep outside in a sleeping bag he himself had made.