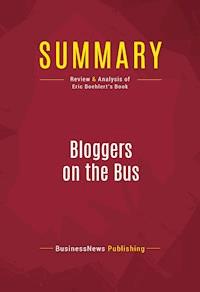 The must-read summary of Eric Boehlert's book: “Bloggers on the Bus: How the Internet Changed Politics and the Press”.This complete summary of "Bloggers on the Bus" by Eric Boehlert, a renowned writer and journalist, analyses his account of the 2008 presidential campaign and the impact of internet blogs on the media and the campaign at this time. Added-value of this summary:• Save time• Understand the influence of blogs on the media• Expand your knowledge of technology and its impact on society and politicsTo learn more, read "Bloggers on the Bus" and discover how the internet and blog information influenced the 2008 presidential campaign.

Book Presentation: Bloggers on the Bus by Eric Boehlert

While the liberal blogosphere has been gaining power and influence for several years, the 2008 presidential election campaign marked the emergence of this phenomenon as a force which literally changed the landscape of how political campaigns are organized, funded, and kept accountable. Bloggers on the Bus showcases a number of stories from the 2008 presidential campaign that illustrate the impact made by the Internet and bloggers on the mainstream media, the campaigns, and the candidates themselves.

Eric Boehlert is an award-winning journalist who writes extensively about media and politics. He is the author of Lapdogs: How the Press Rolled Over for Bush and is currently a Senior Fellow for Media Matters in America.

In February 2007, news was released that Nevada Democrats had teamed up with Fox News to sponsor a debate among the Party’s presidential hopefuls. Given the common belief that the Fox Network’s main focus was to promote and advance the Republican agenda, including the creation of a smear campaign against Barack Obama, the news of the co-sponsorship was met with shock and disbelief all over the liberal blogosphere.

When political blogger Matt Stoller read the news, he did what he always does: he blogged about it, with the headline “WTF?” For Stoller and others, the remedy was obvious: bloggers needed to get the debate canceled. By the time the media brawl ended, bloggers got their way and had actually forced two Fox-sponsored debates off the campaign schedule.

In the past, complacent Democratic politicians had adopted a “go along, get along” strategy with Fox News, hoping that Fox would be cooperative in return. It didn’t work.

In early 2007, Fox News had begun its smear campaign of Obama. In response, documentary filmmaker Robert Greenwald decided to make a short montage of clips – peeled off of Fox News – to give viewers a focused look at the cable channel’s slanted ways. When the controversy erupted over the planned debates, Greenwald added a petition for viewers to sign urging that the debate be dropped. The petition received over 300,000 signatures.